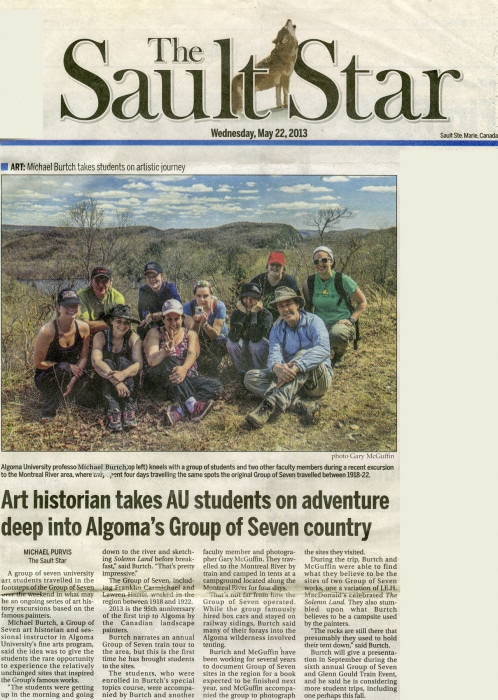 A group of seven university art students travelled in the footsteps of the Group of Seven over the weekend in what may be an ongoing series of art history excursions based on the famous painters.

Michael Burtch, a Group of Seven art historian and sessional instructor in Algoma University’s fine arts program, said the idea was to give the students the rare opportunity to experience the relatively unchanged sites that inspired the Group’s famous works.

“The students were getting up in the morning and going down to the river and sketching Solemn Land before breakfast,” said Burtch. “That’s pretty impressive.”

The Group of Seven, including Franklin Carmichael and Lawren Harris, worked in the region between 1918 and 1922.

2013 is the 95th anniversary of the first trip to Algoma by the Canadian landscape painters.

Burtch narrates an annual Group of Seven train tour to the area, but this is the first time he has brought students to the sites.

The students, who were enrolled in Burtch’s special topics course, were accompanied by Burtch and another faculty member and photographer Gary McGuffin. They travelled to the Montreal River by train and camped in tents at a campground located along the Montreal River for four days.

That’s not far from how the Group of Seven operated. While the group famously hired box cars and stayed on railway sidings, Burtch said many of their forays into the Algoma wilderness involved tenting.

Burtch and McGuffin have been working for several years to document Group of Seven sites in the region for a book expected to be finished next year, and McGuffin accompanied the group to photograph the sites they visited.

During the trip, Burtch and McGuffin were able to find what they believe to be the sites of two Group of Seven works, one a variation of J.E.H. MacDonald’s celebrated The Solemn Land. They also stumbled upon what Burtch believes to be a campsite used by the painters.

“The rocks are still there that presumably they used to hold their tent down,” said Burtch.

Burtch will give a presentation in September during the sixth annual Group of Seven and Glenn Gould Train Event, and he said he is considering more student trips, including perhaps this fall.