The Arctic By Bicycle

By Gary and Joanie McGuffin

We were alone in the Richardson Mountains, the northernmost extension of the Rocky Mountain chain. Our chests were heaving with the effort of the last climb, our legs burning, and our seats saddlesore. It had been an incredible day’s ride from the Peel River high onto the plateau. Ordinarily we would have camped, but the sun continued to shine, warming the air late into the Arctic summer’s never-ending day. Suddenly, Gary extended a finger toward the rough tumble tundra below. A large grizzly bear bounded with an effortless gait toward us. At first we froze more in awed admiration than fear. No other animal symbolizes the wildness of the Yukon backcountry more than the presence of the grizzly. Then, catching out breath with hearts still pounding, we leapt back into the saddles and hastily sped down the following slope. We had no intention of knowingly sharing his immediate domain for the night.

After descending the mountain pass, we dropped our bikes at the edge of a bubbling mountain stream and set up camp. Outstretched on a flat rock, we dipped our feet into the icy green waters, hardly imagining that days like this would become commonplace on the wilderness leg of our 12,000 km traverse of Canada by bicycle.

The journey began in Nature’s deep-freeze, an Arctic spring day on the frozen Beaufort Sea Ice Road. Nothing could quell our mounting excitement on April 3rd, not even the frosty -40 degree temperatures. With panniers loaded down with winter camping necessities, a tent, and food for three days, we set our sights on the western horizon where the azure blue sky met the crisp edge of a stark white world. “How could it possibly be so utterly silent in a land so immense?”

For two days we slithered our way over the slick surface where the intense cold would only allow the shortest of breaks. Occasionally we encountered signs of life such as fresh Arctic fox tracks or flocks of puffy white ptarmigan feeding on the buds of scrub willows. East of the delta, a reindeer lifted its head in curiosity and quietly watched us pass. But further north on the frozen road, it was the sighting of polar bear paw prints that left us with the deepest, most long lasting impression.

Upon reaching Inuvik, we patiently awaited spring thaw before resuming our trek. Since Inuvik marks the northern terminus of the Dempster highway, it was no longer necessary to rely upon firm ice conditions for travel. But on June 1st, a late spring blizzard came slashing at the coast and the rivers were still locked in ice. By June 8th, a definite promise of summer was in the air and the following day we departed from Inuvik en route to Newfoundland.

Grinding through the soft gravel on the Dempster’s northern end, we found it treacherous at first. Our tires swerved as if we were on a sand beach, and gaining any traction on the hills was frustratingly difficult. The second afternoon, a truck crowded us onto the soft shoulder throwing me out of control. The chain-reaction effect sent us both catapulting over the handlebars. On the east bank of the Mackenzie River crossing, we overlooked a familiar setting. In 1984, with 300 km to go, we had raced our canoe past this point onwards to the Arctic coast with a bitter north wind plowing straight into our faces, and whitecaps heaping over the bow (After having canoed from the St. Lawrence Gulf, winter was closing in on our final destination Tuktoyaktuk. We actually deemed the Ice Road an appropriate beginning to the cycling journey since it made a physical link with our previous voyage.)

Today we hailed that same north wind as good fortune. On a bike, a tailwind is one of a cyclist’s greatest allies. Our saddlebags were loaded to the zipper-splitting point.

We had timed our journey through the Arctic to coincide with the only bug-free summer weather. Half-way through each day we pulled off the road laying our bikes and ourselves on the soft, warm tundra. While devouring our simple lunches, we revelled in the fine setting. Come July, we knew the only safe haven from the swarms of mosquitos and blackflies would be our tent.

Beyond the Richardson Mountains, the Dempster crosses the imaginary line at 66 degree latitude known as the Arctic Circle. From there we followed the pale dusty road onto the highest ridges of Eagle Plains. Within our first two weeks, life in the saddle became second nature. We were able to pick our way through the knobby surface, instinctively swerving around boulders and potholes. Apart from the challenges of isolation and extreme weather and wind, the road surfaces were constantly changing depending upon the make-up of the surrounding mountains. In the Richardsons, razor-sharp shale threatened to tear our tires. Through the rolling Ogilvie Mountains the road surface was a combination of pale limestone and dolomite, and as we approached the Southern Ogilvies, the riding was yet again different. Unlike the regions to the north and south, glaciers filled these valleys during the Ice Age leaving deep deposits of gravel from moraines. Although this was perfect road-building material, we remembered it as one exhausting day where our tires knifed into the soft road carving an 80 km groove down the Dempster. We had pedalled beside the Ogilvie River, a tributary of the Peel, climbed the divide and descended into the Blackstone River valley. We gazed upon the early travellers’ landmark, the craggy peak of Tombstone Mountain in the Southern Ogilvies and finally completed the highway by winding our way down the Klondike River valley.

Just outside Dawson, miles of gravel bermes snake across the landscape, remnants of the gold rush years when entire river beds were dredged for gold. From the high point of land, the “Dome,” we overlooked the confluence of the Klondike and Yukon Rivers whose tributaries once bore an immense wealth of gold.

The Klondike highway carves a route south from Dawson to the Yukon’s capital, Whitehorse. For the next five days, the weather drew in around us like a grey cloak. Our bodies grew hot from pumping up the steep grades, then we quickly became chilled to the bone in the damp mists of the downhill runs. But any discomforts in the saddle were far outweighed by the excitement we felt each time we encountered wildlife. One drizzly morning, a black bear sauntered from the bush and ambled along the roadside unperturbed by the steady crunching of our bicycle tires several hundred feet behind. Another time, a cow moose and her calf came trotting from the forest cover and crossed directly in front of us. Just being on a bicycle day after day was a very intimate way of experiencing the country. Our senses were keenly turned into our surroundings, the refreshing fragrance of spring flowers spread in a colourful band along the roadside, the minute sound of crackling underbrush or the gurgling of a mountain stream, or even the feel of the road and the taste of dust would forever be lasting impressions of the Yukon. For us, this land’s wealth was measured less by its gold nuggets and more by the open hospitality heaped upon us by the few friendly families scattered along a mostly unpopulated route.

In early July, Gary and I departed from the Alaska highway east of Watson Lake and travelled south on the new, mostly unpaved Stewart-Cassiar highway. While on the narrow winding road, it almost appeared that we were being swallowed up by the immense wilderness surrounding us. Lofty mountain walls soared above as we followed the land’s natural contours along river valleys and up through converging slopes of low mountain passes. Long hours on the bicycles were spent dreaming of kayaking wild mountain streams or returning with skis to explore the snowfields and glaciers that beckoned far above.

Outside the abandoned mining town of Cassiar, a rickety brown van sputtered by. Moments later it returned drawing up alongside us. The driver jumped out and threw open the back doors. “You’ll have to ride with me.” He declared matter-of-factly, eyeing our heavily laden bicycles. “The road ahead is an impassable sea of quagmire two feet thick!” We winked at one another, then politely refused without explaining where we had come from. People had a tendency to exaggerate conditions and no amount of rain, snow, or mud would stop us now …even if we had to carry the bicycles.

Several afternoons later we turned west into Dease Lake. Intriguing stories of a place 130 km from here kept up a persistent whispering in our heads. Our destination would be the village of Telegraph Creek in the Stikine River canyon. Beyond the first 60 km, this is no ordinary trail. In places, we would’ve felt more comfortable as mountain goats while descending the steep hairpin turns to the canyon floor. We dropped 300 metres and gained it back on a series of steep switchbacks where the road is barely three metres across and bordered by cliffs on one side and sheer drop-offs on the other. On one of the local buildings in Telegraph Creek, a sign hung over the door: “Dam the Iskut, Dam the Stikine, Damn the People.” It reflected the bitter resentment that the local residents feel towards a proposed B.C. hydro electric project that would virtually wipe out one of the last unharnessed watersheds along the Pacific coast.

In nearby Glenora, an elderly Tahltan Indian known as “Boots” introduced us to an important aspect of west coast native culture and livelihood. Together we hauled in the fishing nets strung out for the catch of spring salmon. The fish were duly filleted, strung along a pole and carried to the smokehouse to add to the growing winter food staple. Later we shared a meal of fresh baked bannock and boiled salmon all washed back with buckets of hot tea sweetened with condensed milk.

Between Bell I Bridge and Meziadin Junction, a torrential rainstorm had transformed the Stewart-Cassiar into a ribbon of syrupy muck. Up to now the road had been firm, although the air was thick with dust. Now we struggled along, the mud clinging to our knobby tires and dripping from the drive chain into the fine-tuned mechanism known as the rear derailleur. As logging trucks wheeled past, they stirred the mud into a brown mist that settled on our bodies and coated our panniers. At day’s end, our only relief was wading into the clear waters of a nearby stream with our unloaded bicycles.

Crossing the line of transition from dirt to pavement at Meziadin Junction completed the first leg of our cross Canada journey. Quite suddenly there was only the whirring noise of heavily treaded tires on smooth pavement. The clanging of pebbles amongst spokes abruptly stopped. The vehicles were passing at much higher speeds and the less-attentive drivers were wrapped up in a much faster pace of life. We were already looking forward to the green and peaceful Queen Charlotte Islands!

We never intended that our tour be easy, fast or comfortable. We sought a rambling route that spanned the extremes of climate and culture. Rather than pedalling directly from one place to another, we linked up points of interest sometimes creating situations that severely tested our fortitude and our equipment. As we left the unpaved wilderness highway, we knew that there would seldom be times again when we felt so much a part of the environment through which we travelled. The natural feel of an unpaved road beneath the wheels, the incredibly diverse and powerful weather systems and even the struggle to get over the mountains had given us an intimate understanding of the land through which we travelled. 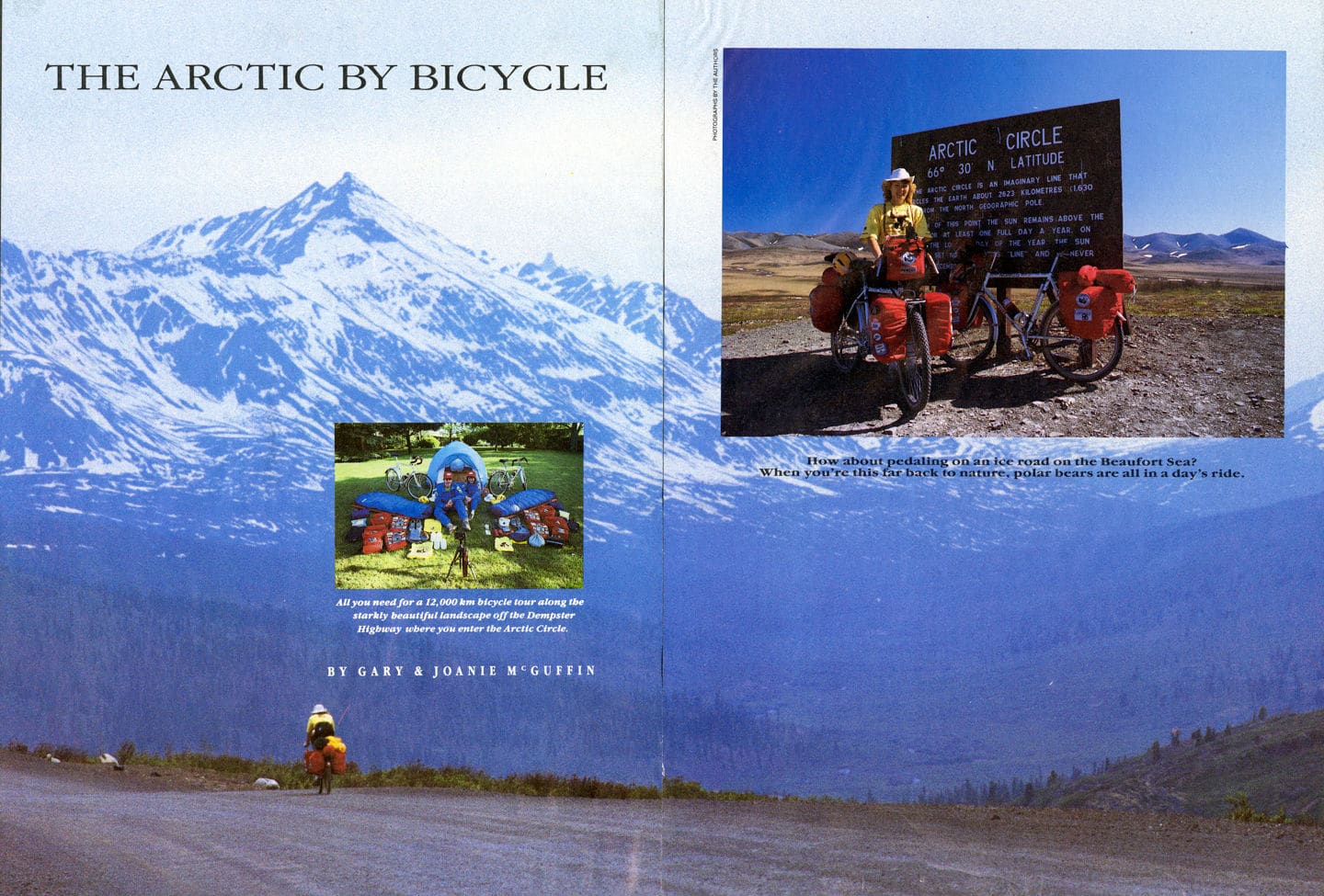 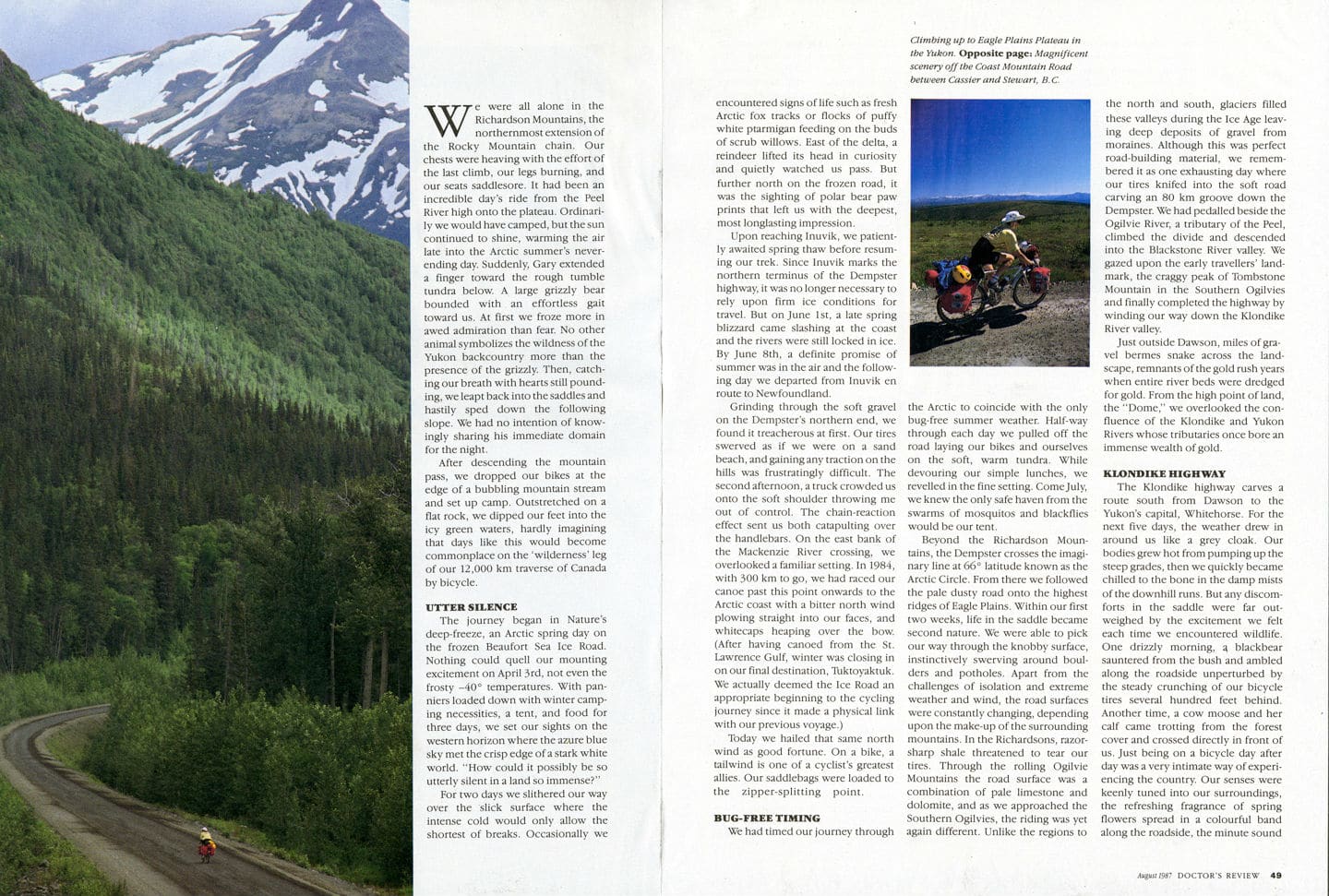 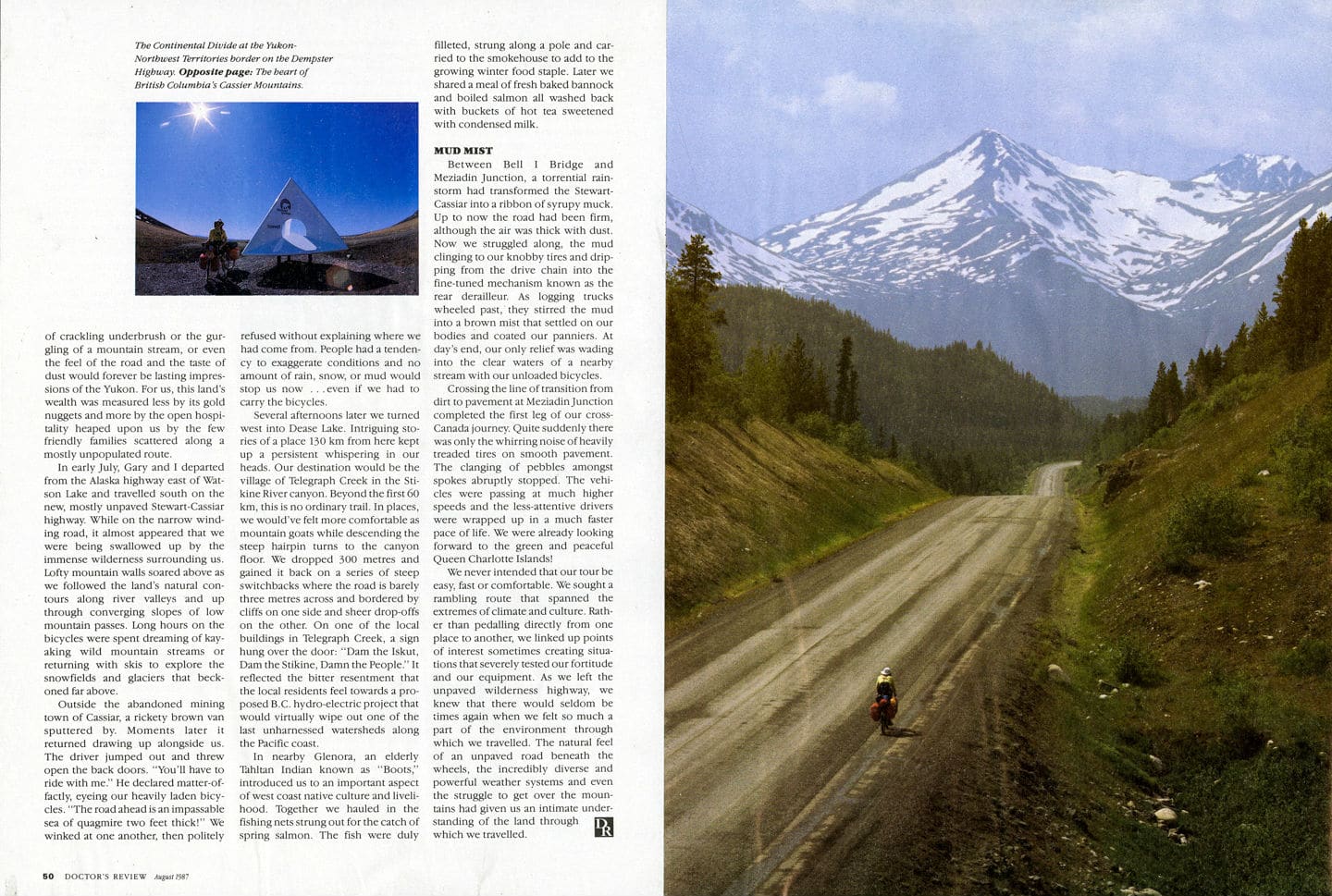