Ancient Forest – In the Footsteps of Grey Owl

In the summer of 1997 when the McGuffins embarked upon their 1900-km (1200-mile) canoe journey through Ontario’s ancient forests, they were following in the footsteps of Grey Owl, Canada’s first conservationist. In the 1930s, Grey Owl was a voice for conservation through his widely published books, articles and European-public speaking events.  At the time, he was the world’s most well-known conservationist.  Like Grey Owl, the McGuffins aimed to be a voice from and for the wilderness, only by the late 90s, they were at the forefront of using digital and satellite technology to share real-time their experiences and discoveries through the Web, newspaper and photography for the benefit of the public conservation debate happening in Ontario at the time. 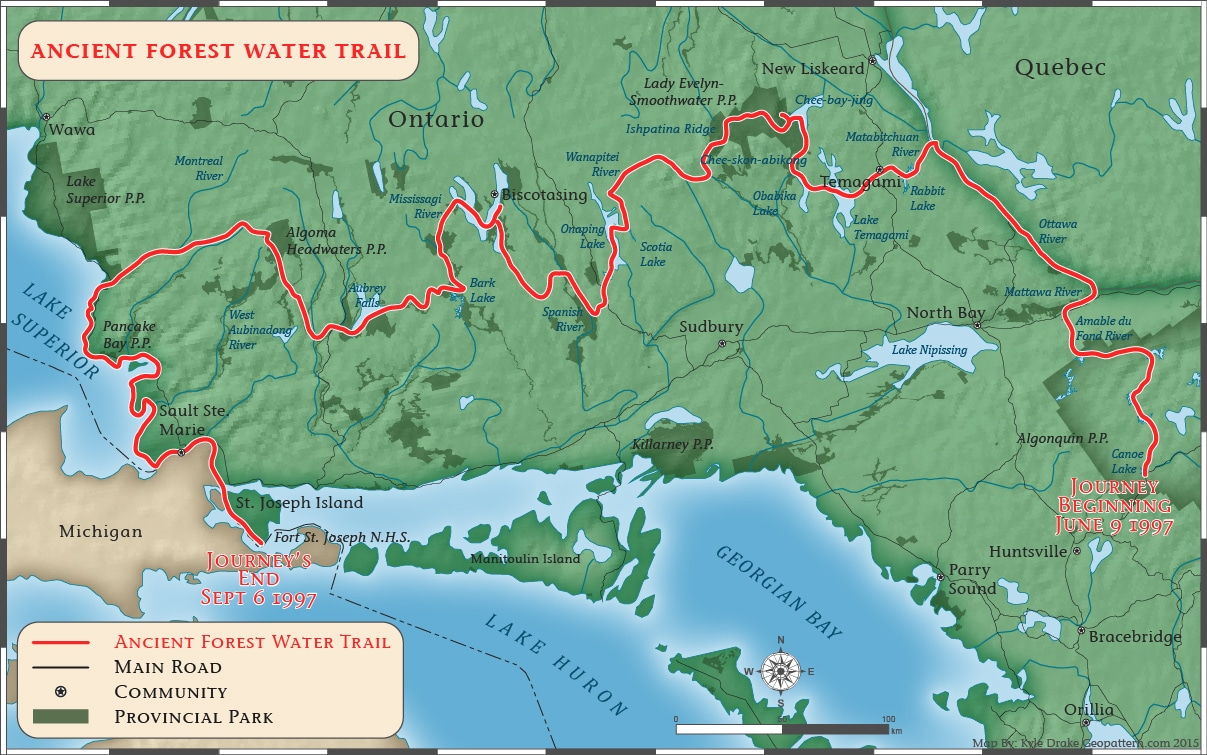 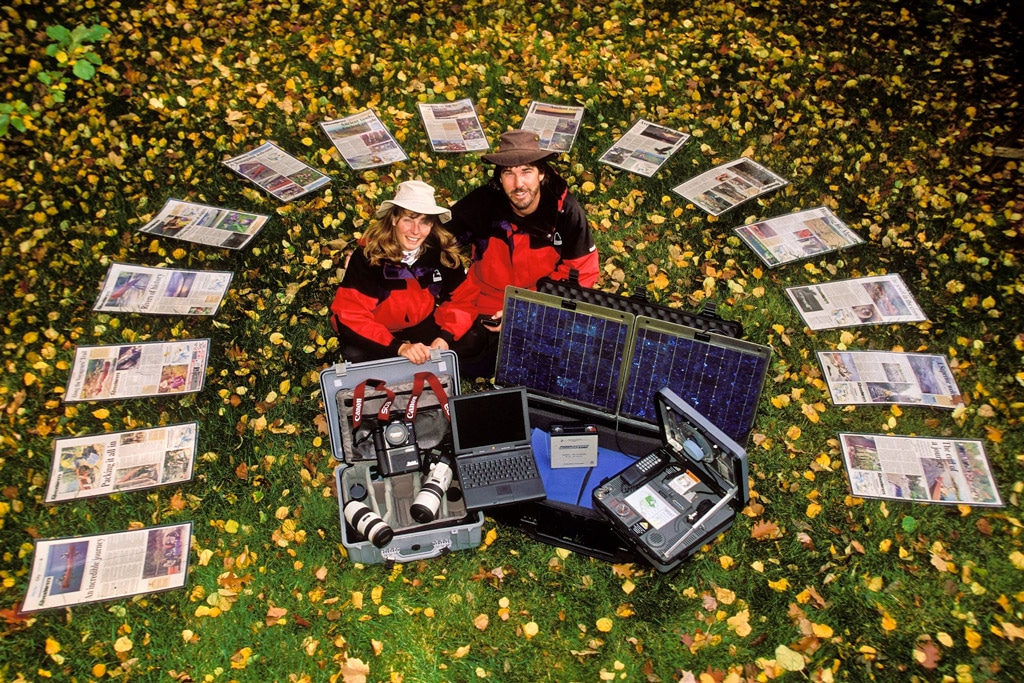 Gary and Joanie McGuffin surrounded by their communications technology and the 14 newspaper articles published while they were en route. 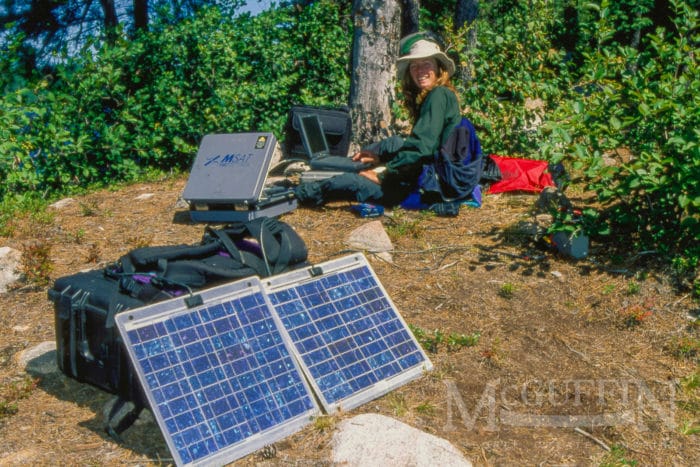 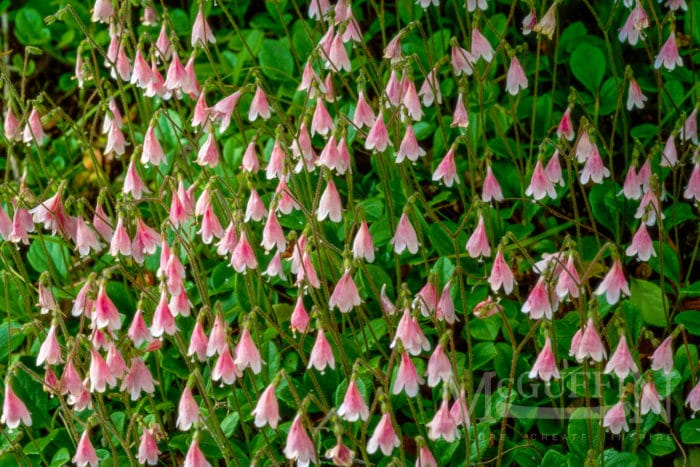 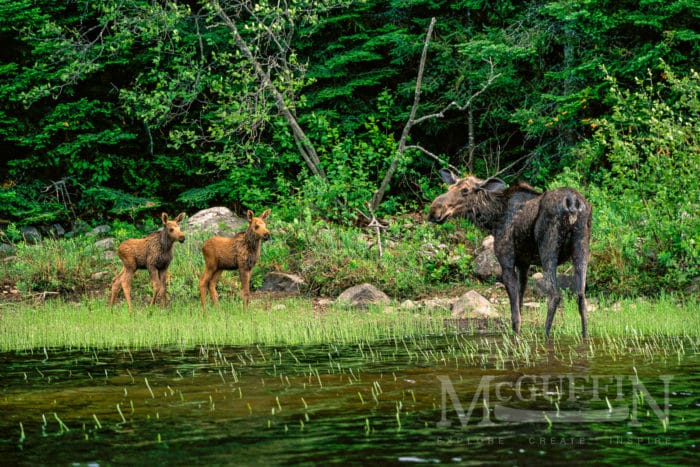 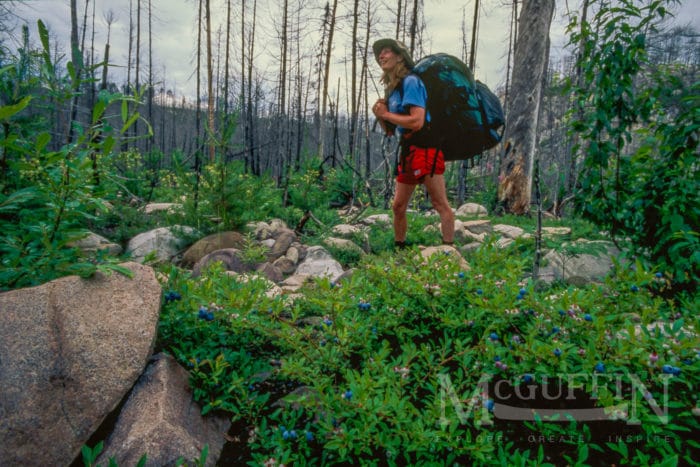 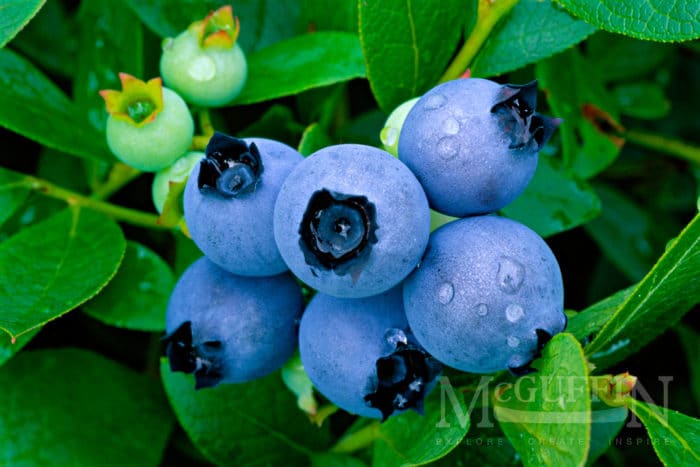 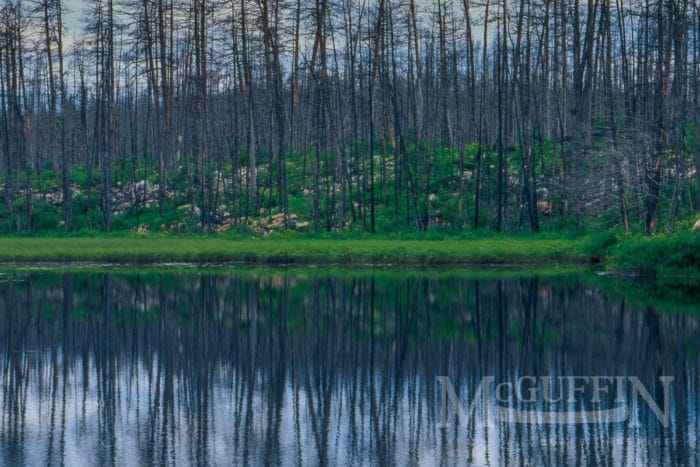 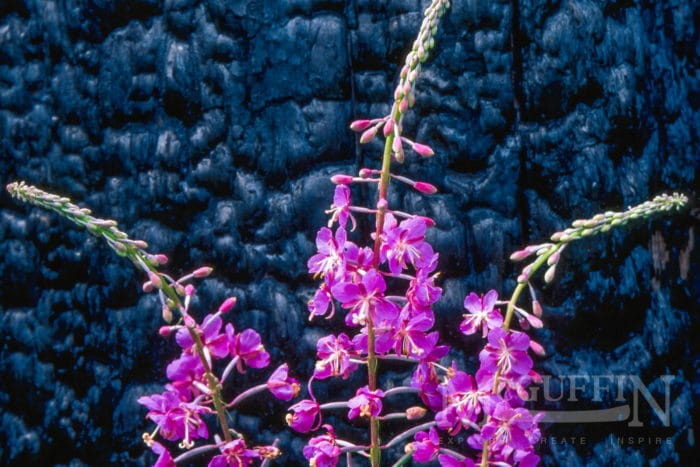 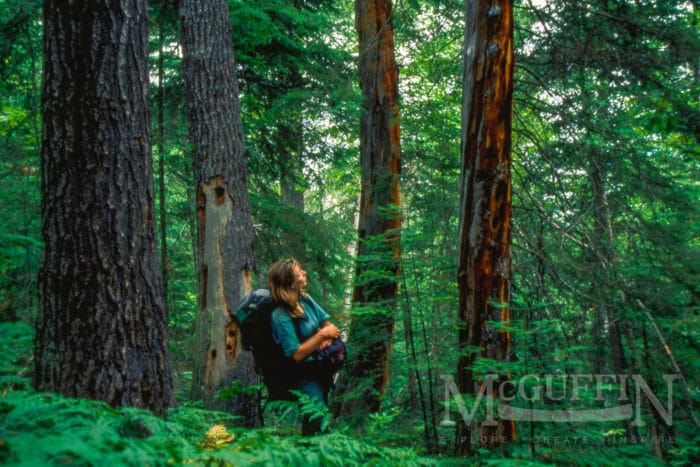 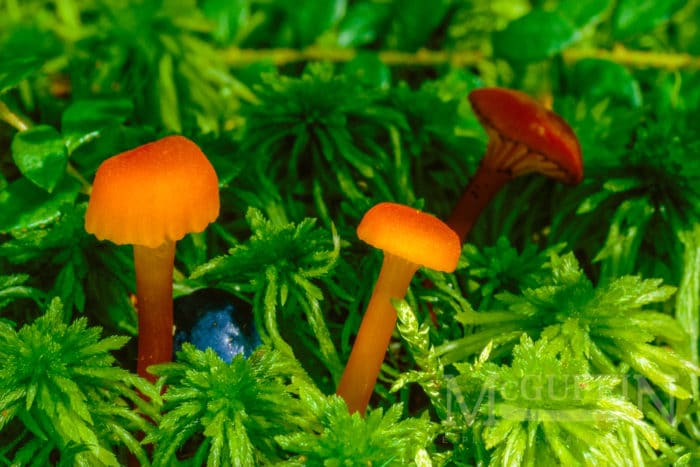 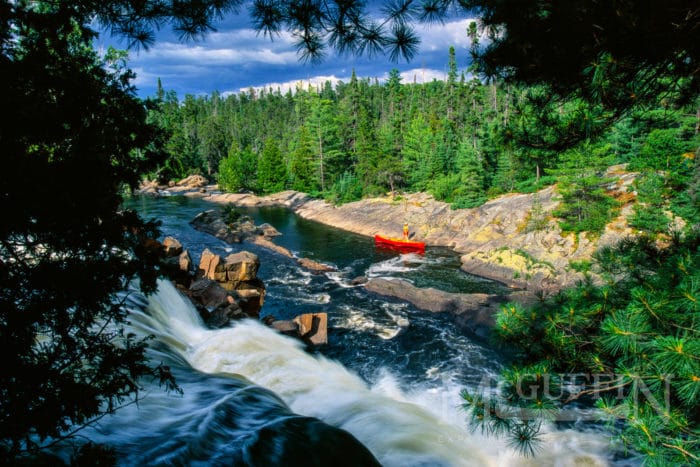 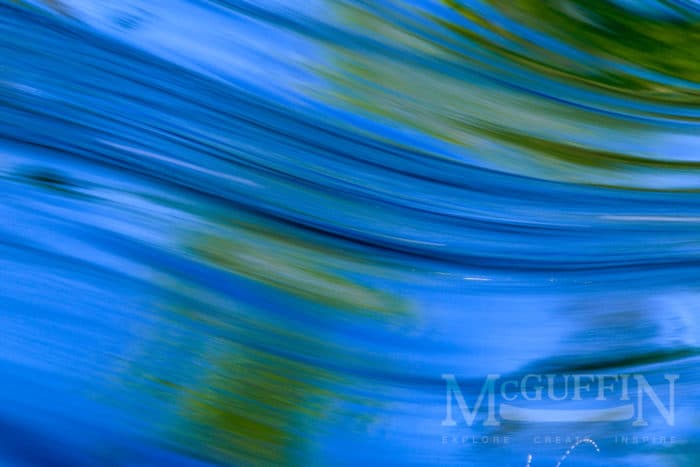 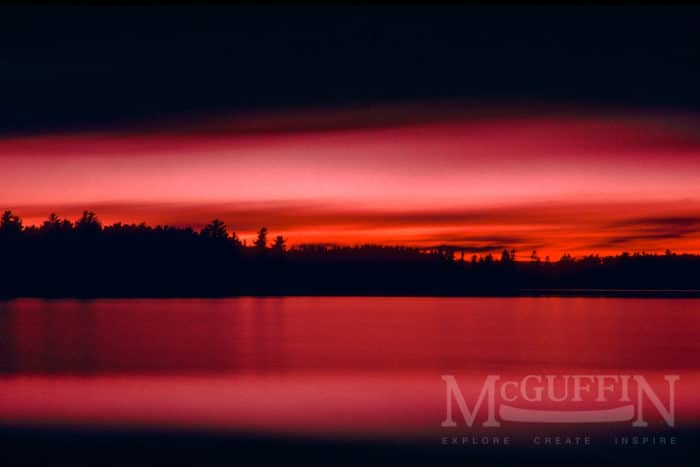 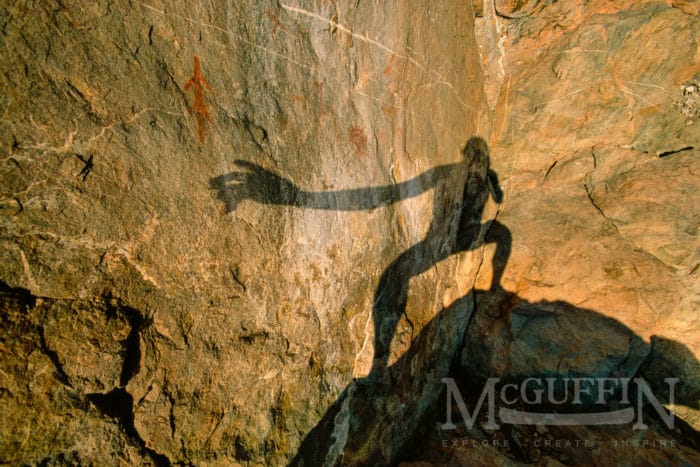 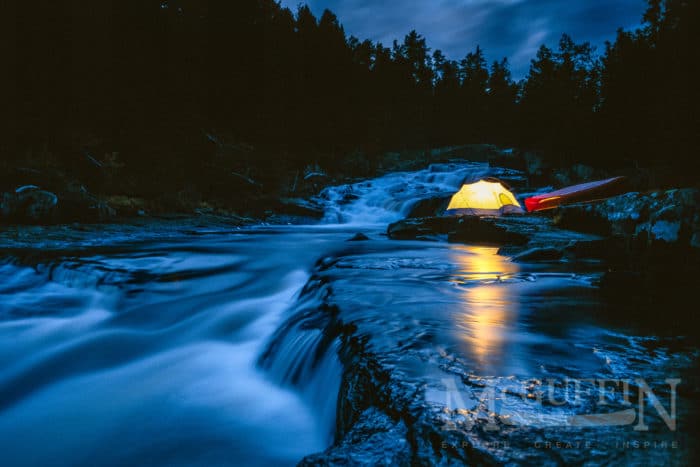 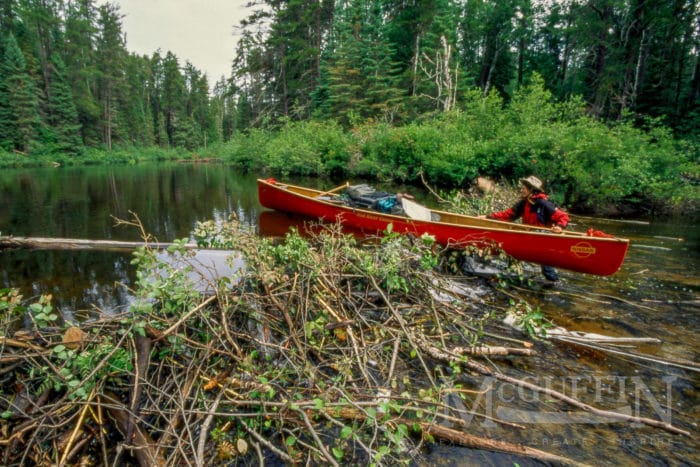 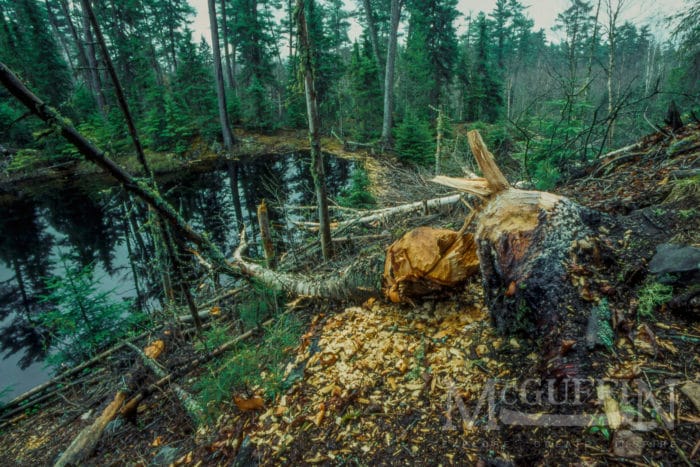 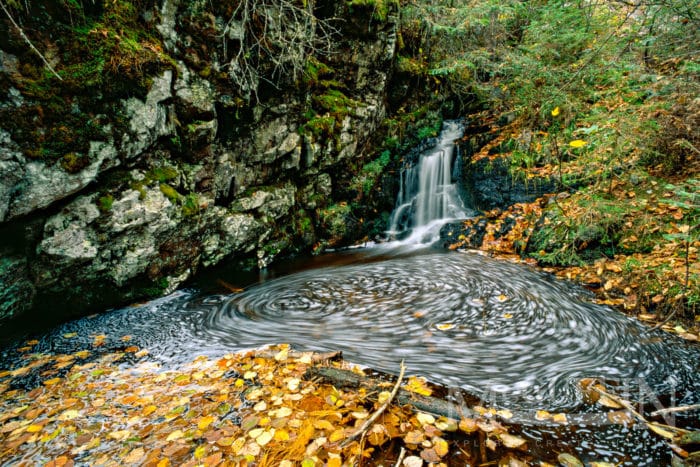 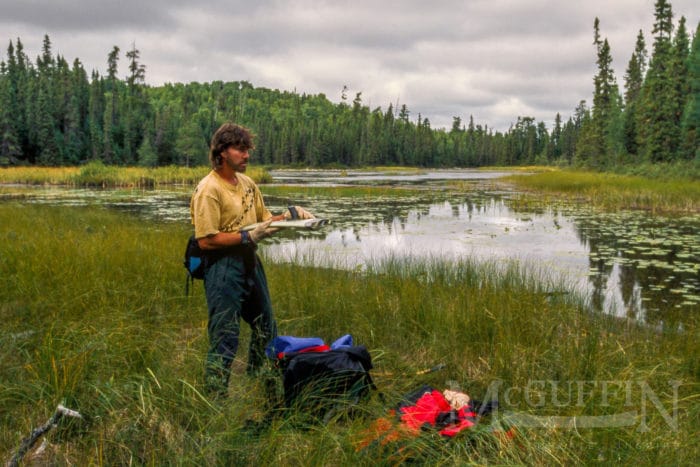 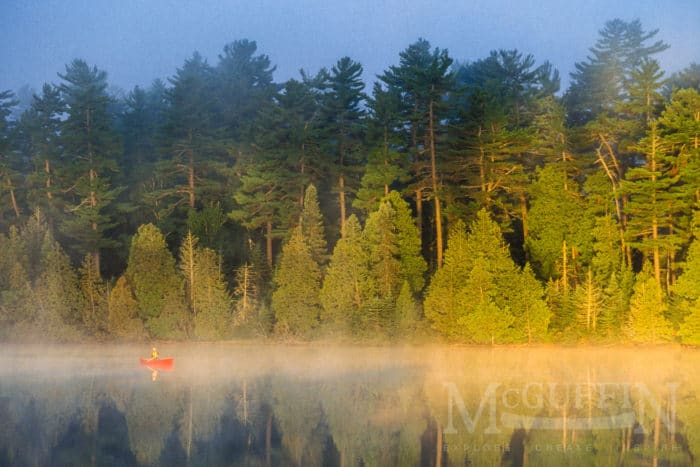 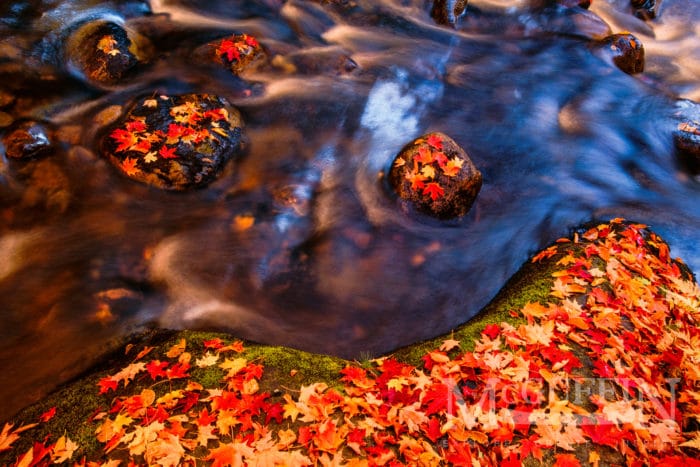 A Journey from Algonquin to Algoma Highlands

My eyes went from the computer’s 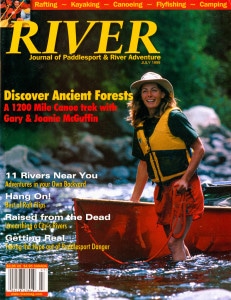 eerie glow to the dark night sky where a billion pricks of light illuminated faraway worlds. I recognized a few of the traveling stars as satellites and wondered which one was receiving our signal.  It took twenty minutes to an hour for our typed stories and photographs to travel 25,000 miles above the earth and down to a receiving dish in Ottawa.  From there, the information entered the phone lines and ended up at our webmaster’s computer in Sault Ste. Marie.  Then, the files traveled to the web and finally landed in the newspaper.  Once weekly, newspaper presses across Canada rolled out a color page in the Saturday edition to be read with the morning coffee.  My husband Gary’s and my reports were being followed by our readers, while we traveled along Ontario’s Ancient Forest Water Trail.  We progressed to the cadence of Nature’s moving water and communicated at the same time with people thousands of miles away, thanks to the power of the sun and the high tech world of telecommunications. 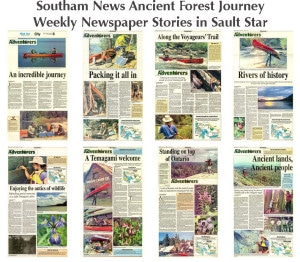 In the summer of 1997 when the McGuffins uploaded these weekly colour stories for Southam News from their wilderness journey, the world of digital cameras, satellite transmission and the Internet was still a novelty to most people. 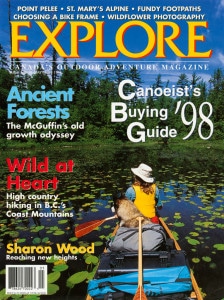 Wiggling through wetlands, sliding across island-studded lakes and bucking low-water rapids, Joanie and Gary McGuffin raise a solitary wake on a 1,900-km journey to save Ontario’s remaining old growth forests.

“The Ancient Forest Water Trail is but one watery line paddled to set a precedent. Our hope is that our collective human imagination can understand that preservation can shape a new and brighter future.” 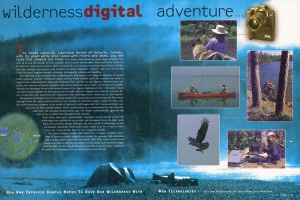 Text and Photography by Joanie and Gary McGuffin

The Great Lakes – St. Lawrence forest of Ontario, Canada, with its giant white pine laced with rivers and lakes, was the land that shaped our lives. Our earliest explorations by canoe began from the time each of us was old enough to hold a paddle. Beaver ponds and marshes, lakes and forests connected by rivers not roads were the places where we found life in all its complex, interconnected beauty. Within this deep mystery, too precious to be resolved, we found inspirations, creativity and a love for life that could be shared together through adventure, photography, writing and speaking. Our canoeing route to explore this wilderness area was mapped out using the expertise of ancient forest scientists, Ontario’s Wildlands League and the World Wildlife Fund. The decision was made to begin in the world-renowned Algonquin Provincial Park and end on Lake Superior. Between these two points, the waterways included Temagami’s vast system of historic canoes routes – the Sturgeon, Wanapitei, Spanish and Mississagi Rivers to the ancient forests of the Algoma Highlands. In all, 1200 miles of rivers and lakes knitted together the last one percent of North America’s original Great Lakes- St. Lawrence contiguous ancient forest, a forest that once swept from the Maritimes to the Mississippi from Connecticut to Lake Superior.

In the Footsteps of Grey Owl Book 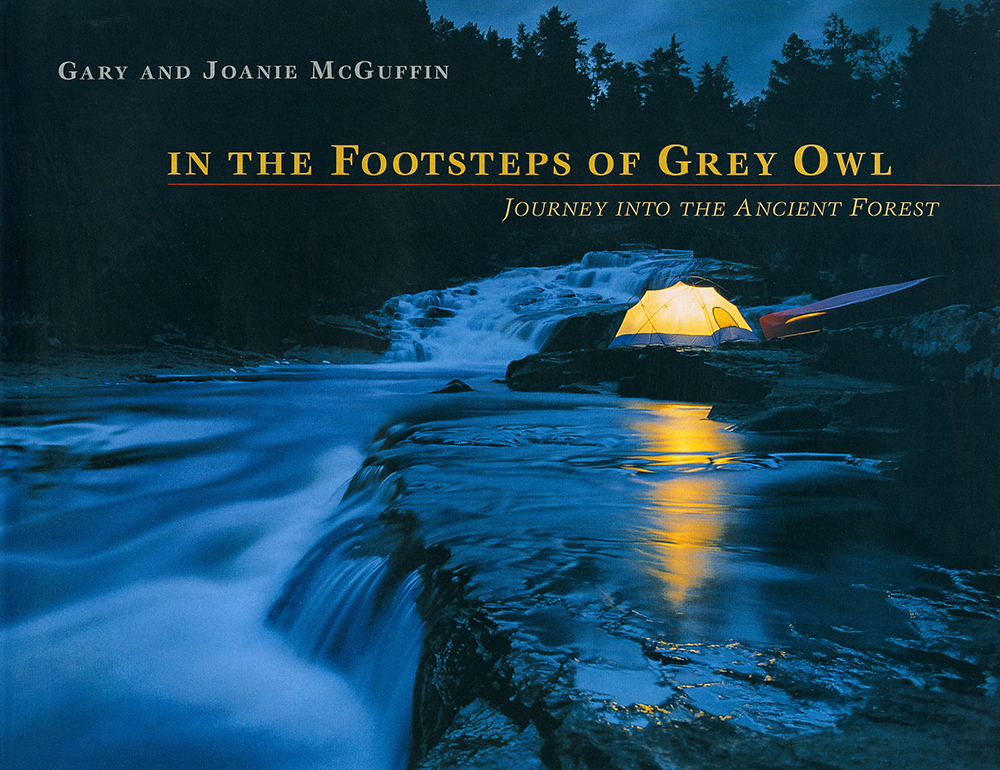 In The Footsteps of Grey Owl, Journey into the Ancient Forest

Grey Owl, or Wa-Sha-Quon-Asin as he is known to the Ojibway people, was born Archie Belaney in England in 1888. At the age of seventeen, he moved to Canada to follow his boyhood fascination for the Canadian wilderness and the aboriginal peoples. Grey Owl’s appreciation of the beauty and fragility of the wilderness became the driving force behind his celebrated speeches and his four best-selling books, The Men of the Last Frontier, Pilgrims of the Wild, The Adventures of Sajo and Her Beaver People, and Tales of an Empty Cabin.

In 1996, almost sixty years after Grey Owl’s death, the Ontario government was determining the future use of the wilderness he loved. Due to the important forest research of Dr. Peter Quimby, Ontario had, for the first time, officially recognized that old growth forest existed in the province.  For better or worse, the fate of this northern landscape was being decided by forestry and mining corporations, conservation interest groups, and the public. Gary and Joanie McGuffin decided to make their own contribution to this debate by embarking on a 3-month canoe journey into the heart of Grey Owl country. They aimed to show that the ancient forests and pristine waterways of the region constitute a magnificent natural heritage that should be preserved for all.

Their 1,900-kilometre (1,200-mile) journey took the McGuffins through some of the most beautiful forests in Canada. From Algonquin Park to Temagami, Algoma and Lake Superior, they travelled the same rivers that Grey Owl once paddled, including the Sturgeon, Spanish, Mississagi, Aubinadong, and Montreal. While discovering overgrown portage trails and long unused campsites, they imagined themselves walking in the footsteps of not only Grey Owl but the generations of Anishnabe who came before him.

In their book, In the Footsteps of Grey Owl, Joanie’s words and Gary’s photographs tell an adventure story that is also one of conservation achievement: the McGuffins’ satellite and digital communication efforts through the Web, newspaper and radio from the wilderness helped to shape the public debate over the preservation of Ontario’s old growth forests.  The book is also illustrated with more than 100 colour photographs and selections from Grey Owl’s own writings.