Exhibitions | Painted Land: In Search of the Group of Seven 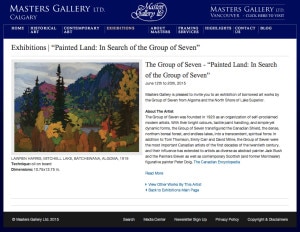 Masters Gallery is pleased to invite you to an exhibition of borrowed art works by the Group of Seven from Algoma and the North Shore of Lake Superior.

There will be a showcasing of the film “Painted Land: In Search of the Group of Seven” presented by Michael Burtch, Gary and Joanie McGuffin.

The Group of Seven was founded in 1920 as an organization of self-proclaimed modern artists. With their bright colours, tactile paint handling, and simple yet dynamic forms, the Group of Seven transfigured the Canadian Shield, the dense northern boreal forest, and endless lakes, into a transcendent, spiritual force. In addition to Tom Thomson, Emily Carr, and David Milne, the Group of Seven were the most important Canadian artists of the first decades of the twentieth century, and their influence has extended to artists as diverse as abstract painter Jack Bush and the Painters Eleven as well as contemporary Scottish (and former Montrealer) figurative painter Peter Doig.