Life as an adventure

With eight books, numerous magazine articles, and countless radio and television interviews and documentaries to their credit, Joanie and Gary McGuffin have made a career out of their love of the outdoors. They have paddled their way into our hearts and put the beauty of Northern Ontario’s wilderness on the world map.

Since meeting each other 1979 as students in Seneca College’s outdoor recreation program, their life has been one big outdoor adventure. Joanie, who envisioned becoming an organizer and planner for outdoor expeditions, was doing just that when Gary literally saved her life while on a college-sponsored winter camping trip in 1981. They were taking a short-cut across a frozen river.

“I was using my poles to probe through the snow,” he told the college’s alumnae magazine years later. “But before I knew it, Joanie had taken her skis off and was walking behind me.” When he looked back, all he saw was a hole in the snow. “She was gone,” he said.

He reached down into the hole and grabbed at something. It was Joanie’s hair. He pulled her out and got her onto solid ground.

“I guess we had to get married after that,” he said. The McGuffins, now both in their mid-40s, had childhood visions of some of the things they wanted to do. As a 12-year-old, Gary saved an article from National Geographic on hiking the Appalachian Trail. Joanie always wanted to explore Lake Superior after reading an article in a Toronto weekend magazine describing the joys of backpacking along the lake’s shoreline.

Before setting out to explore every creek and river in Northern Ontario, they had this romantic notion about homesteading. They paddled into the family cabin at Rabbit Lake on a cold November day. As Joanie recalled, “it was romantic at first, going out to get water, cutting our own wood, and heading 18 miles into town to get our mail, but it made us realize that what we really wanted to do was share our experiences, not just survive.”

That sharing began in 1988 when their first published article appeared in Lake Superior Magazine, a Minnesota-based outdoors publication. They had 10,000 words to relate their cross-Canada canoe trip story and this gave them the edge to get their first book published. But it wasn’t that easy. They wanted to find someone who could write their first book. They found editors, but no writers, so they wrote it themselves on an old manual typewriter. And they have been writing ever since.

When that first book Where Rivers Run was published, Canadian publisher Jack Stoddart liked it so much that he sent them on a six-week, 25-city Canadian book promotion tour. It was a turning point in their career. They now had this book that was their passport to credibility. “Not that you make a lot of money on books,” said Joanie, “but you have this story to share with everyone. And the fact that this book is now almost 18 years old and still selling well says it all.”

Jack Stoddart had his own ideas for the McGuffin’s second book. He wanted a lot of text. Gary on the other hand, wanted the focus to be on photography. Jack sent them a $20,000 advance, which was a lot of money for them in the early 1990s, but they returned it, and found another publisher for Superior, Journeys on an Inland Sea. Ironically, Jack Stoddart liked the book and ended up distributing it.

When the Stoddart publishing and distribution company went bankrupt in 2002, the McGuffins were picked up by Firefly Books. “We ended up with a way better situation,” according to Joanie. “Better distribution in Canada and the U.S., too.”

With their book publishing in good shape, the McGuffins are free to continue their journeys from their comfortable base on a 300-acre, heavily treed property off Lake Superior’s Goulais Bay, just north of Sault Ste. Marie. With their seven-year-old daughter Sila being home-schooled, they can pick up at a moment’s notice and head off into another adventure. Having a young child has not cramped their traveling style at all. “From the time she was two weeks old, said Joanie, “we visited our parents, and then popped her into a canoe and were gone for a month.”

The McGuffins are proud of the way they are raising their daughter. As much as they enjoy their adventures, their real love is family, home and living in the present. “Children always help you come back to the really positive things in life each day,” said Joanie. “Kids see solutions to things in a new way.”

What’s next for the McGuffins?

They are leaders in a new organization, the Lake Superior Conservancy and Watershed Council, dedicated to the long-term sustainable health of the lake. It boasts an impressive list of 35 member organizations and individuals, including the David Suzuki Foundation, Ducks Unlimited, Science North, the City of Sault Ste. Marie, artist Ken Danby and the Thunder Bay Field Naturalists.

The Smithsonian Institution in Washington is on their list for 2008. They are joining an international organization of wildlife artists working on an exhibit to tell the story of the boreal forest. They are also lobbying education authorities to introduce eco-tourism courses like the ones at Seneca into northern college curricula because they want others to join them in selling their message of conserving the bio-diversity of the region.

“We have to share with the people of Ontario that we have these incredible landscapes here, and that we can look at another future, rather than always looking at our resources as something to harvest,” said Joanie. 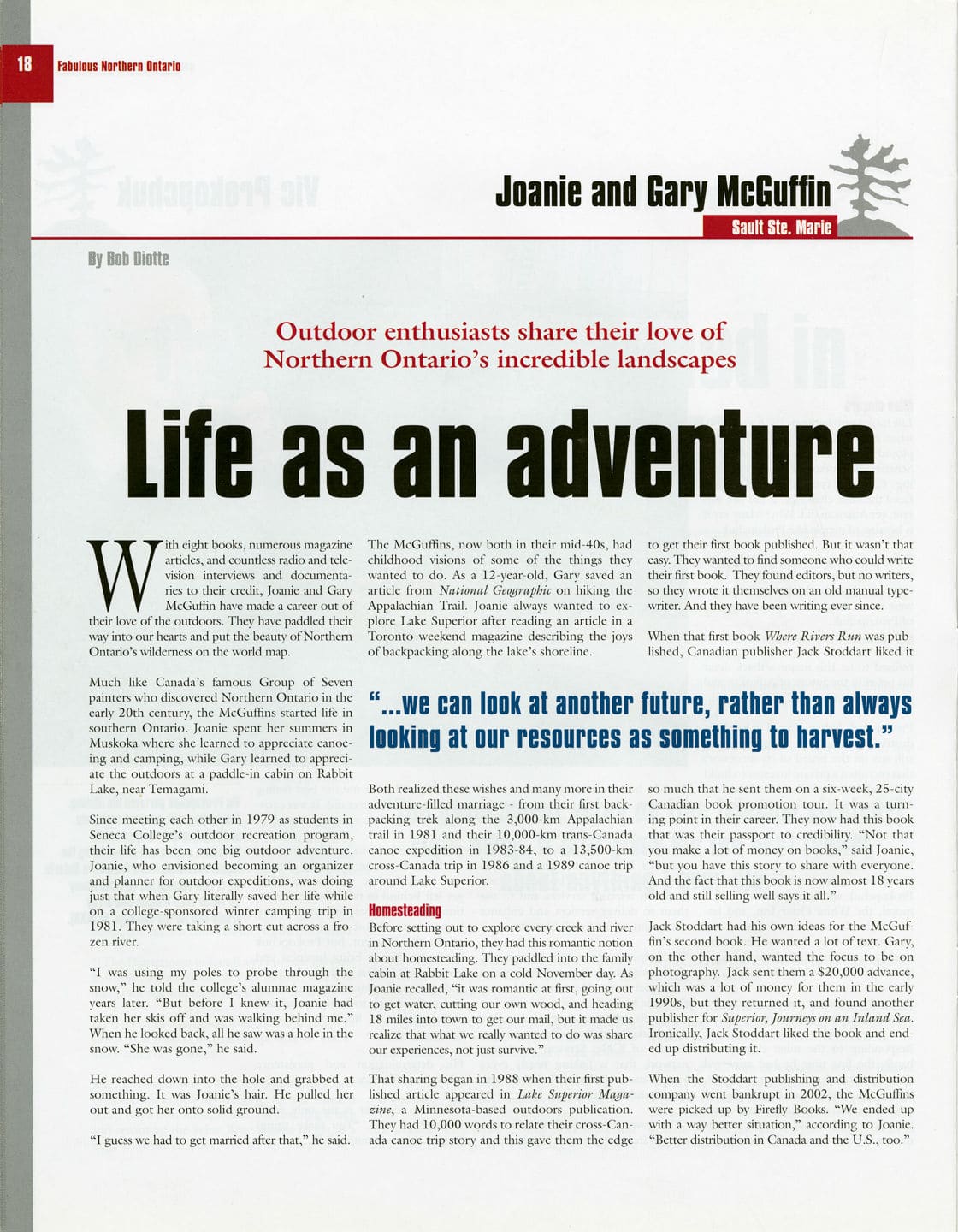 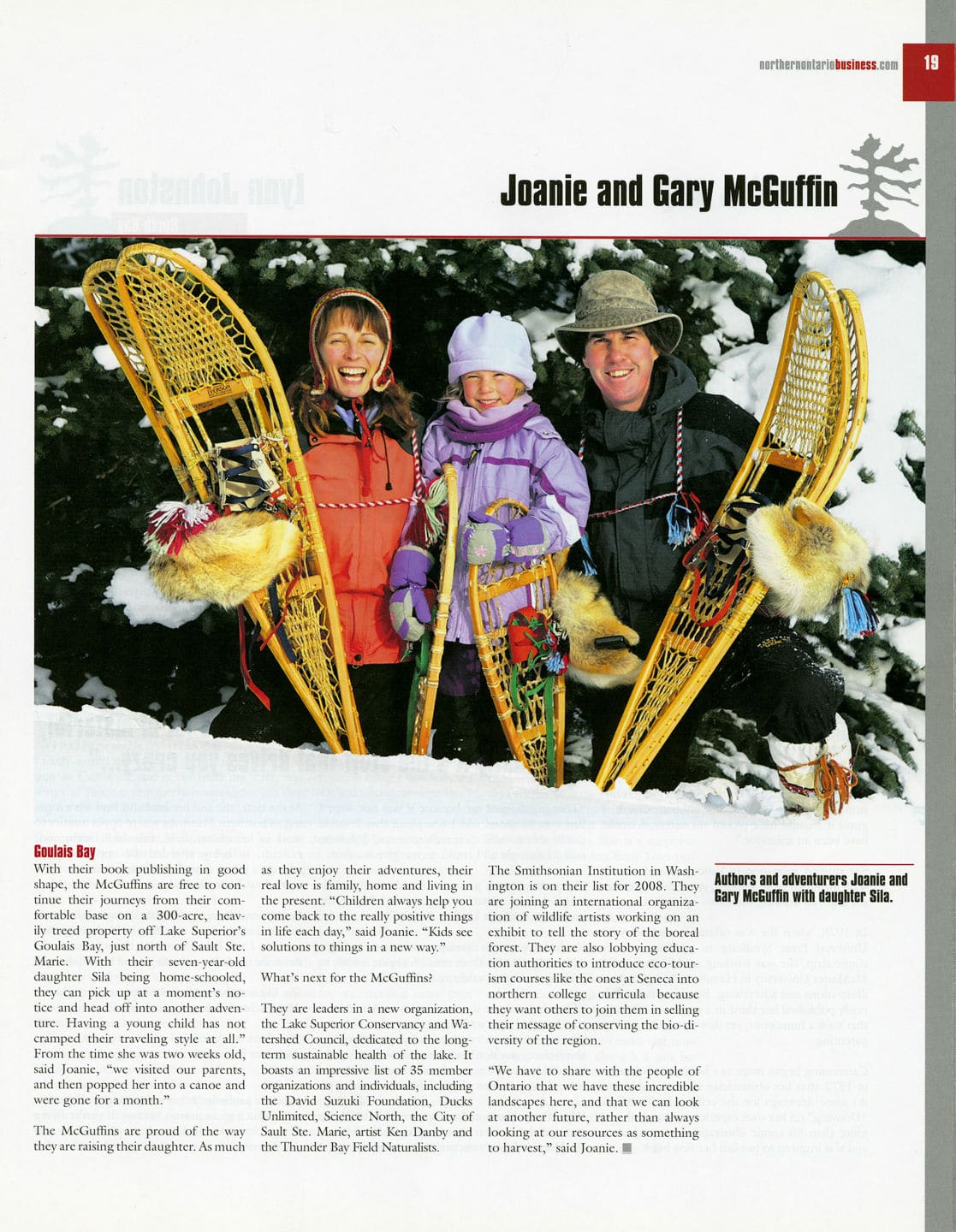