Their Marriage Is Up A Creek, But These Newlyweds Were Never Happier

The freezing downpour had gentled into a light snow, but the winds across the St. Lawrence were still dishing up 15-foot waves. No matter. The scrub-faced couple from Ontario calmly knifed their canoe into the river at Baie-Comeau, Que. and paddled southwest toward Montreal. They spent most of the second day on an exposed rock; days four through seven they hardly stirred from their tent. “You just let nature do its thing and live with it,” they told themselves. Then, 150 miles and two weeks into their journey, nature rendered up a pearl for their patience. By the mouth of the Saguenay River the couple nosed into the freshet; suddenly, the twin killer-whale logo on the bow of their craft was frisking with a real-life 50-foot fin whale and several white whales.

“This is one crazy way to start a marriage!” exclaimed Joanie McGuffin. Indeed, Joanie, 22, and Gary, 24, were married April 30 before their parents and 75 friends and relatives in Bracebridge, Ont. The very same week they set out on a 6,200-mile trans-Canada journey along routes carved in water by the 17th– and 18th-century fur traders. From the St. Lawrence they hung a right into the Ottawa River and proceeded on to Lake Nipissing, the French River, Georgian Bay. Lake Superior, Rainy Lake, Lake of the Woods, and so on. In a month the couple will call it a season at the Pas near the Manitoba-Saskatchewan border, roughly the midpoint of their pilgrimage. Next spring they plan to resume their honeymoon a canoe by going north and will wrap it up by summer’s end – a pair of wily old marrieds, taking their ease in the Yukon.

Gary and Joanie met four years ago at Ontario’s Seneca College, where they excelled in a program called “outdoor recreation technician.” By the time they graduated in May 1981, 24 of their fellow students had dropped out. Gary and Joanie were honors graduates among the six in their class who survived the rigors of the program. At the outset Joanie was something of a self-appointed wallflower. She hadn’t dated all through high school in a Toronto suburb; she was diffident, a loner whose idea of a good time was bird-watching in the bush.

Gary, who was born and raised in London, Ont., the son of the proprietors of a hunting and fishing camp, was a topnotch hockey player and a bona fide outdoorsman, powerfully built and brimming with self-confidence. Recalls Joanie, “I didn’t know whether he’d stay interested in someone like me. I always put myself down. I would think, “I can’t do that.” Gary always reminded me of what I could do.”

The truth is he put her through boot camp. But first came the ritual of recruitment known as courtship, which began during the summer of 1980 and was highlighted by a fall canoe trip down the Missinaibi River. “He took me to all these back bays,” Joanie remembers, “and all the grouse were drumming and all the loons were coming back. And Gary can make a really good loon call. We were discovering things together.” Says Gary with a smile: “I enchanted her.”

The days after graduation in 1981 the sorcerer and his apprentice headed for Springer Mountain, Ga., where they began a 2,000-mile hike of the entire Appalachian Trail, which ends on Mount Katahdin in Maine. “It was a test expedition for us to see how we worked together in trying circumstances,” explains Gary, who adds that “it was a mutual experiment actually.” In any case, Joanie acquitted herself just fine and was therefore invited to complete her training by passing the winter in the 24-by-24 foot cabin Gary had helped build as a 16-year-old on Rabbit Lake in Temagami, Ont. The hardy couple lived alone in the snowy wastes for four months. “We had to do a lot of things just to keep our brains working,” Gary recalls. “Everything else we did was to keep ourselves alive, to eat and keep warm. “Beams the irrepressible Joanie. “It was perfect.” Gary proffered a diamond ring on Valentine’s Day 1982.

A year and a half later the newlyweds are not exactly playing Jeanette MacDonald and Nelson Eddy on the Canadian waterways. “Sometimes it’s not romantic at all,” observes Joanie, “because we’re so grubby and our feet smell when we get in the tent.” She pauses, however, and looks over at Gary, who has been singing away the afternoon. The tune, he explains is called Joanie’s Song. “It’s a song I wrote about why I love her and why it’s so much fun to be together and do everything together.” Joanie positively swoons. 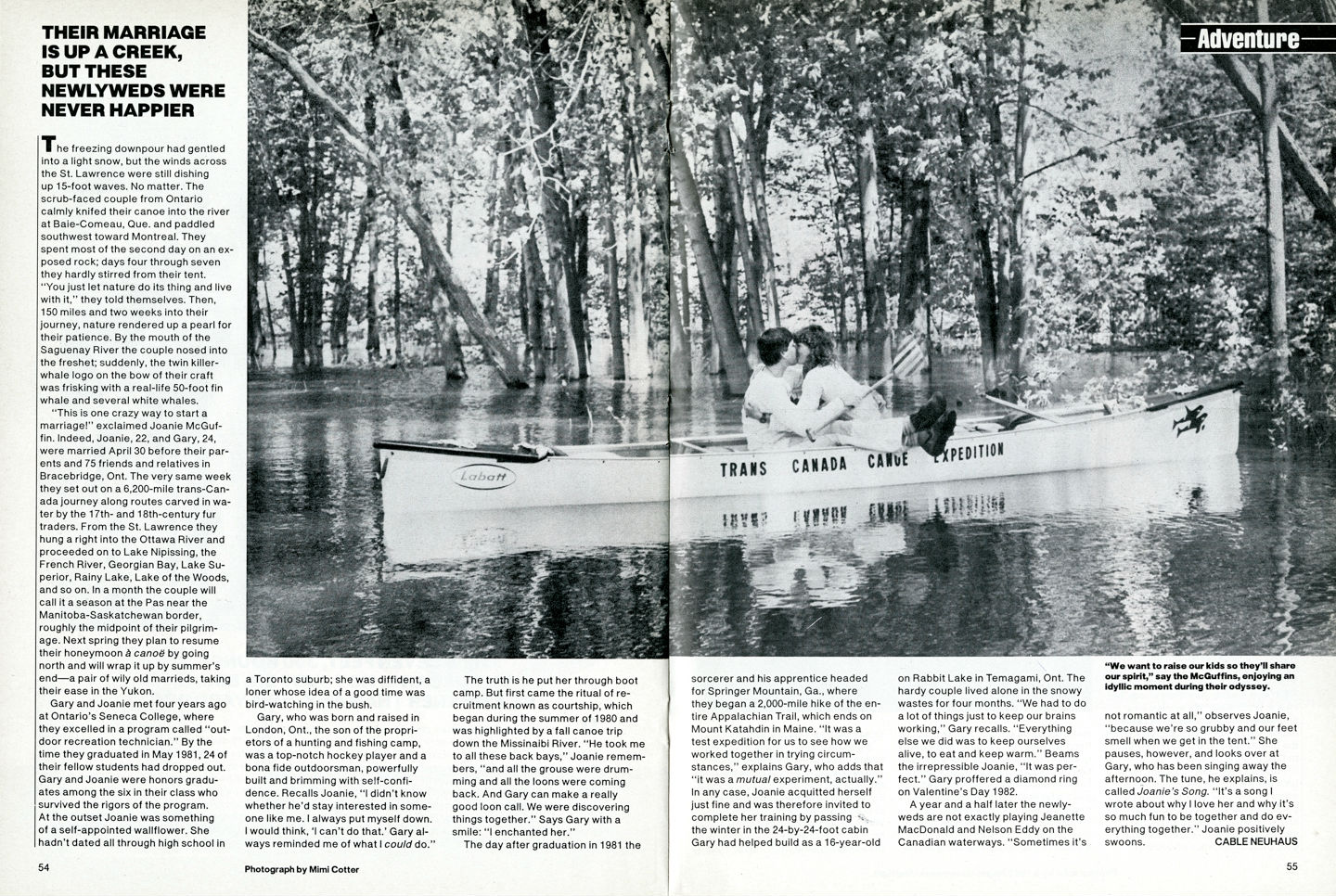