Gary and Joanie McGuffin are Canadian explorers, conservationists, motivational speakers, writers and photographers. Inspired by childhood summers immersed in Ontario’s wilderness far from their city homes, they have chosen to devote their adult lives to travelling through, documenting and advocating for the many wilderness regions at risk in Canada and elsewhere. In their quest to be close to nature, they have used canoes, kayaks, bicycles, snowshoes, skis and hiking boots. They have tramped, paddled and pedalled across major and minor trails and waterways. Their routes have carried them from the Gulf of St. Lawrence to the Beaufort Sea, around Lake Superior, along the Appalachian Trail, from the Arctic to the Pacific to the Atlantic Coast and along the paths taken by one of Canada’s first conservationists, Grey Owl.

The McGuffins’ beginnings were modest. Travelling the length of the Appalachian Trail in 1981, carrying all of their equipment on their backs, the McGuffins tested their desire to become adventurers without knowing where their career would lead.  They brought a Pentax K1000 with a 50 mm lens that they used for personal pleasure and seven rolls of 36-exposure Kodak film – all that they could afford at that time – which allowed them about two shots per day. They photographed the Trail as they experienced it, confirmed their personal commitment to adventuring, and dared to dream bigger dreams: to travel by canoe from the Gulf of St. Lawrence to the Beaufort Sea and to raise environmental consciousness about this area.

Preparations for this journey were extensive. Using their well-honed problem-solving skills, the McGuffins set out to make this dream adventure happen. They spent hours doing research in libraries, seeking out sponsors, and acquiring and testing equipment. New photography skills were learned on the spot as they received sophisticated equipment from their sponsors. They soon discovered that with other lenses the world could look much different than it had through a 50 mm lens. For this trip, film did not have to be rationed.

This journey was well publicized. The McGuffins wrote regular articles for The Toronto Star and The London Free Press and did a 40-week adventure serial for CBC Radio. Much to their surprise, upon returning from the wilderness they were inundated with requests for a book about their trip, including one from Peter Gzowski, a well-known Canadian broadcaster and writer. There was so much pressure from publishers that they acquiesced, and soon became authors as well as adventurers. They felt complimented that someone wanted to sit down with two young people and coach them through the writing process. Where Rivers Run, which included eight pages of colour photography, came out in hardcover in 1988. The national book tour that followed was an adventure of a different sort. Since then, the McGuffins have written four other books.

Their equipment has evolved over the years. During the 1997 canoe trip in which they followed Grey Owl’s canoe routes in Ontario, the McGuffins packed an entire communications system into a 45-kilogram waterproof case: two solar panels, a high-resolution digital camera and a satellite phone. With the newly available technology they communicated in real-time with other Canadians, educating them about the wonders of their country and enriching their lives.

It wasn’t until this past year that the McGuffins switched over completely to digital photography: they no longer carry film. They are supported by FujiFilm Canada, DayMen Photo Marketing LP, Lowepro and Canon Canada.

Being adventurers as well as photographers provides its own special obstacles, such as how to balance the desire to photograph with the physical requirements of the trips themselves. To solve that dilemma, Gary gets up early in the morning to capture the best light conditions for shots before the day’s journey begins. Many years of travel together have given the McGuffins a smooth system for moving quickly into position for a shot. Later, Joanie writes the words that complement the pictures. There’s no backtracking. The McGuffins capture the adventure as it unfolds.

Safety is paramount, Gary emphasizes that he would never jeopardize his safety or anyone else’s for the sake of a particular shot. Life is too precious for unnecessary risk.

The McGuffins’ goal has always been to share their experiences with others. Becoming increasingly aware of the power of photography, the McGuffins have actively used the stories and documentation of their journeys to emphasize the importance of preserving vast areas of Canadian wilderness. Over the years they have become part of a large network of environmental advocates who lobby different levels of government for the creation, preservation or extension of park systems. They have been to many of the places under consideration and have the images that demonstrate what is at stake.

The McGuffins see the photographer’s role as a very powerful dance with nature: a photographer has the opportunity, and indeed, the obligation, to record the environment and to bring it to the world’s attention. “We never know what impact our journey may have,” explains Gary.

This attitude was the motivation behind years of advocacy for the creation of the Lake Superior Conservancy and Watershed Council, whose jurisdiction encompasses the entire Lake Superior basin. The McGuffins, along with a volunteer board, have raised funds, hired a director and staff and set up an office, thus fulfilling another dream.

Another exciting project they are working on is a science and art-based educational exhibition of photography and paintings that focuses on the Boreal Forest. This exhibition will be held in the Smithsonian’s National Museum of Natural History in Washington, in 2008.

The McGuffins’ career have moved far beyond their wildest expectations. They are not mere dreamers, however, they are life-long learners, and problem solvers, who continue acquiring and sharing knowledge about their surroundings. They are respectful, awe-struck partners with the world they document. Above all, they believe in giving back to the Earth. 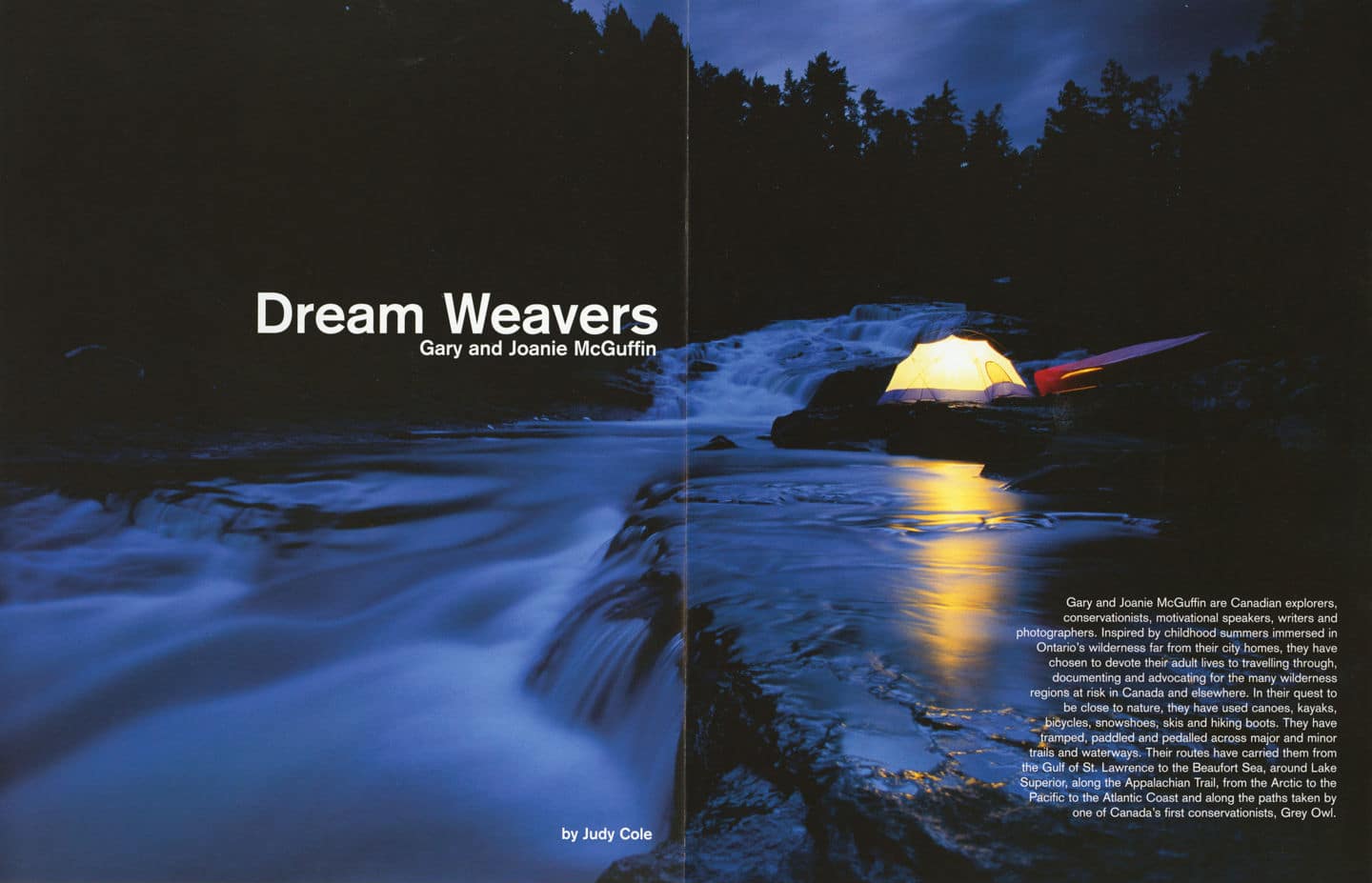 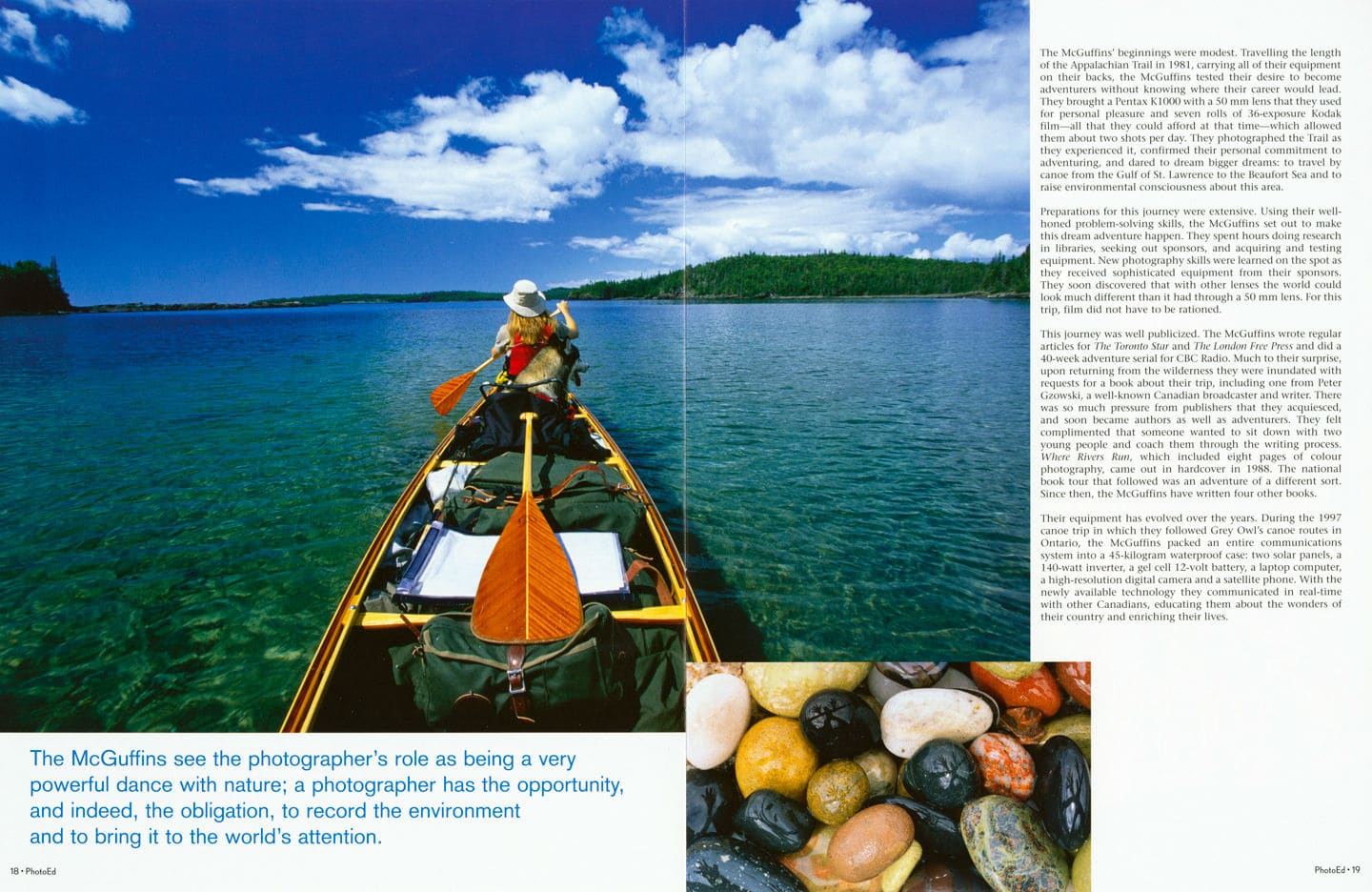 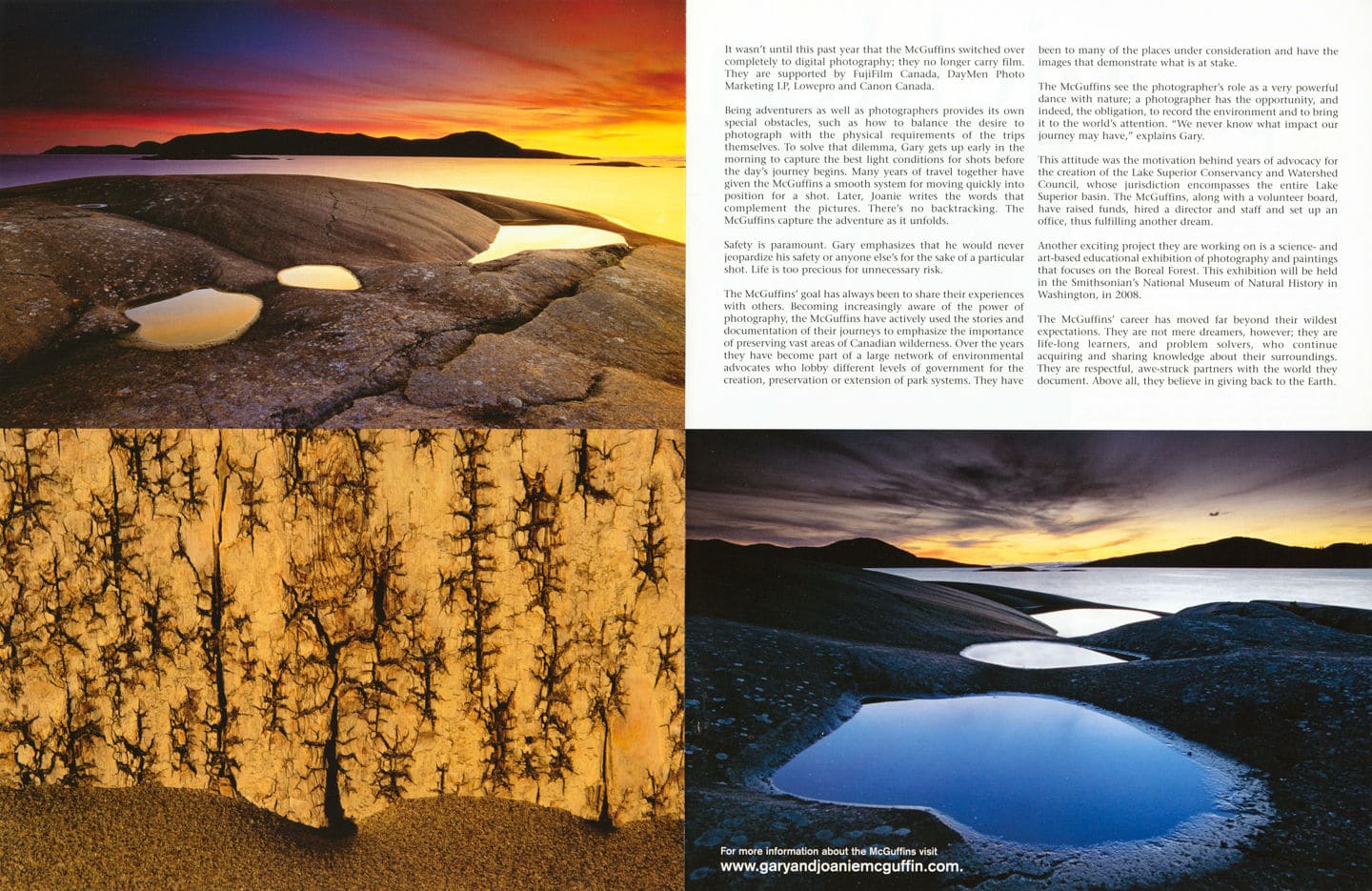