The McGuffins – ­ An Adventure that Started At Seneca

The McGuffins  – An Adventure that Started At Seneca

Seneca’s McGuffins Paddle Their Own Canoe 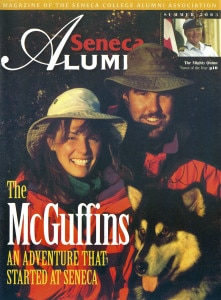 Twenty­-two years after graduating from Seneca College, Gary and Joanie McGuffin are coming clean.  They’ve had a secret that, until recently, was known only by a few loyal classmates who participated in the 1981 Mobile Intensive Learning Experience (MILE) in Algonquin Park.  Gary and Joanie (then Wood) had planned the route and food.

“It was very cold, minus 30 during the day,” Gary recalls. “After two days into our 12 day trip, it was becoming very tense.  Not everyone was comfortable in the clothing they’d brought.”

On the third morning, just setting out after folding up frozen tents and forcing down some food, one of their classmates collapsed.  The team decided to reset the camp giving the fallen friend a chance to warm up and to determine whether it was the effects of the cold that  had knocked him out or a flu outbreak. A smaller group, including Gary and Joanie, set out on skis with their 50 pound packs to break the trail for the next day.

“We crossed this little creek, then made a loop route to come back and thought we could take a short cut across a river,” Gary says, pausing in the story, knowing that the word ”shortcut” in any adventure is a premonition of something ominous.  “I had my skis on and was using my poles to probe through the snow,” he continues, “I was on top of the river and before I knew it, Joanie, who had taken her skis off, was walking out behind me.”

When he looked next, all he saw was a hole in the snow.  “She was gone.”

“I reached down into the hole with my mitts and grabbed at something, whatever was there. It was Joanie’s hair. “ He pulled her out and got her back onto solid ground. The group put her into a snowdrift to absorb the water. Then, back on skis, Gary assigned  another student to stay close behind Joanie to keep her moving until they made it back to the tents. They made it and now, years later, Gary admits, “I guess we had to get married after that.” 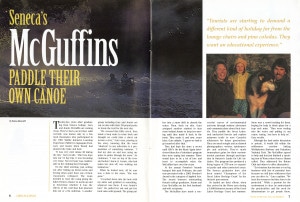 They had kept the story a secret until CBC’s On the Road Again interviewed them for a Valentine’s program they were taping last summer. There would have to be a lot of love andtrust to accomplish what the McGuffins have over the years.

At the annual Premier’s Awards banquet this past February, the pair was presented with a 2002 Premier’s Award in the category of Applied Arts.  The award honours outstanding Ontario College graduates.  Joanie and Gary McGuffin are the first husband­ and­ wife recipients.

The McGuffins have made a successful career of environmental activism through outdoor adventure and communication about their travels.  They paddle the Great Lakes, trek uncharted forests and explore unknown trails to save Canada’s wilderness for future generations.  They are much sought and acclaimed photographers, writers, spokespeople and activists. They’ve made tremendous gains for their environmental passions through participation in Ontario’s Lands for Life initiative.  The program has produced a living legacy of 378 new or expanded parks and other protected areas. The Seneca graduates have also been named “Champions of the Coast” by the Ontario government.

So lauded are their efforts when they arrived in the Wawa area during a 3,000 kilometre journey of the Great Lakes Heritage Coast last summer, there was a crowd waiting for them, hoping for help to block plans for a traprock mine. “They were wading into the water and pulling in our canoe, saying ‘you have to help us’,” Gary recalls.

Although the land under discussion is private, it would fall within the wilderness corridor linking Michipicoten Harbour and Pukaskwa National Park.  The McGuffins agreed to help and had just finished a speaking  tour in Wawa when Seneca Alumni called.  They addressed the Rotary Club and others to offer alternatives. 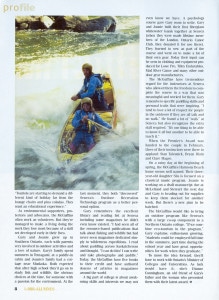 “Ecotourism has become a very big business with lots of potential here because we still have wilderness that you can drive to, “Gary explains. “We have the resources but they have to be protected.”  While a passion for the environment is clear, he understands the practicalities and the need for infrastructure to get people there.

“Tourists are starting to demand a different kind of holiday far from the lounge chairs and pina coladas. They want an educational experience.”

As environmental supporters, protectors and advocates, the McGuffins often work as volunteers. But they’ve managed to make a living doing the work they love most because of a skill set developed early in their lives.

Gary and Joanie grew up in Southern Ontario, each with parents very involved in outdoor activities and a love of nature. Gary’s family spent summers in Temagami, at a paddle­ in cabin and Joanie’s family had a cottage in Muskoka. Both expected that after high school they’d go on to study fish and wildlife, the obvious choices at the time, for someone with a passion for the environment.  At the last moment, they both “discovered” Seneca College’s Outdoor Recreation Technology program as a better personal option.

Gary remembers the excellent library and reading list at Seneca including some magazines he didn’t even know existed. “I had seen all of the resource ­based publications that talk about fishing and wildlife but had never seen magazines dedicated simply to wilderness experiences. I read about paddling across Saskatchewan and thought, ‘I can do this! I can write and take photographs and paddle’.” Today, the McGuffins have five books to their credit and have authored dozens of articles in magazines around the world.

A big part of college is about awakening skills and interests we may not even know we have. A psychology course gave Gary room to write. Gary and Joanie built their first fiberglass whitewater kayak together at Seneca (when they were made lifetime members of the London(Ontario) Canoe Club, they donated it for use there.) They learned to sew as part of the course and went on to make a lot of their own gear. Today their input can be seen in clothing and equipment produced by Lowe Pro, Tilley Endurables, Mad River Canoe and many other outdoor gear manufacturers. 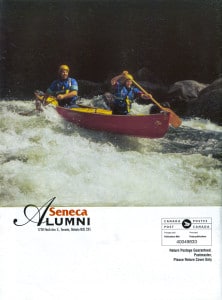 The McGuffins have tremendous regard for the instructors at Seneca who allowed them the freedom to complete the course in a way that was meaningful and worked for them. Gary remembers specific paddling skills and personal traits that were inspiring. “I tend to lose a lot of respect for people in the outdoors if they are all talk and no walk.” He found a lot of “walk” at Seneca but also recognizes the extra skill required. “It’s one thing to be able to know it all but another to be able to teach it.”

When the Premier’s Award was handed to the couple in February, three of their instructors were there to applaud: Stan Talesnick, Bryan Blain and Clare Magee.

On a rainy day at the beginning of spring, the McGuffin’s Harmony Beach home seems well named. Their three­year old daughter Sila is focused on a classical music program. Joanie is working on a draft manuscript due at McClelland and Stewart the next day, and Gary is heading out for supplies to keep them stocked for another week. But there’s a new plan to be hatched.

The McGuffins would like to bring an outdoor program like Seneca’s with a large outdoor co-op component to a Northern Ontario college. “If we combine eco­tourism in the program,” Gary explains, enthusiasm growing, “students could be employed full time in the summers, part time during the school year and have great opportunities for work when they graduate.”

To move the idea forward, they’ll have to work with Ontario’s Minister of Colleges and Universities. As luck would have it, she’s Dianne Cunningham, an old friend of Gary’s father and the woman who presented them with their latest award.