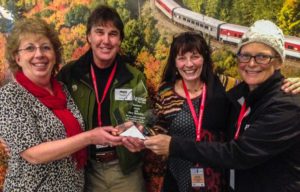 The Northern Ontario Tourism Summit hosted their second annual conference in Sault Ste. Marie with over 300 delegates. The Summit informs tourism associates about upcoming trends, new product development, and relevant speakers.  The Algoma Kinniwabi Travel Association awarded the 2015 Tourism Award of Excellence to Gary McGuffin, Joanie McGuffin, and Michael Burtch for their years of research and dedication into the Group of Seven in Algoma. Joanie, a keynote speaker, gave a slideshow presentation highlighting their research on the Group of Seven landscapes and their work on the Trans Canada Trail (TCT) Lake Superior Water Trail. Following a screening of their recently released documentary film, Painted Land – In Search of The Group of Seven, they received a standing ovation from the full conference delegation.