A rugged couple share their secrets for photographing winter landscape.

Gary and Joanie McGuffin have trampled through the snow in Colorado and Alaska, scaled the Ecuadorian Andes and literally met face-to-snout with a pack of wolves while roving around Lake Superior. The payoff: stunning nature photography.

Now, with winter at full blast, the McGuffins urge amateur photographers to swap that hot cocoa in their hands for a camera. Get outside and shoot landscapes blanketed with snow. Says Joanie “Photography is a wonderful way to give that spark of magic of what it is like to be a human being in nature.”

The McGuffins’ photographic adventures began in 1980 when they set off on a four-month trip hiking the 2,000-mile Appalachian Trail. “We knew we liked doing long trips individually, but we weren’t sure if we could survive doing them together,” Gary jokes.

Dozens of expeditions throughout the USA and Canada and thousands of photographs later, the McGuffins have become a premier nature photography team whose pictures have been featured in Outside, Backpacker and People magazines. Gary, 37, is the major photographer, while Joanie, 36, draws and writes. Their latest Journeys on an Inland Sea which highlights their 2,000-mile trip around Lake Superior, won the U.S. 1996 Great Lakes Book Award, in recognition of their photographs and text.

This couple, who live in Ontario, Canada, often find themselves in severe climates. “There’s no such thing as poor weather, only different opportunities,” says Joanie.

Encounters with wildlife are especially thrilling. While sea kayaking in Baja California, Mexico, the McGuffins came upon a playful baby gray whale. Then the mother said hello. “It was coming at us like a freight train,” says Gary, who readied his camera. The 60-foot-long mother gray whale hurtled out of the water, towering more than 30 feet above them. “We were thinking, ‘Which way is this huge mammoth going to fall?’” But it crashed back down away from the McGuffins. The huge splash showered them both.

And the picture? “I’ve got a big blurry shot of a whale coming at me,” Gary says. 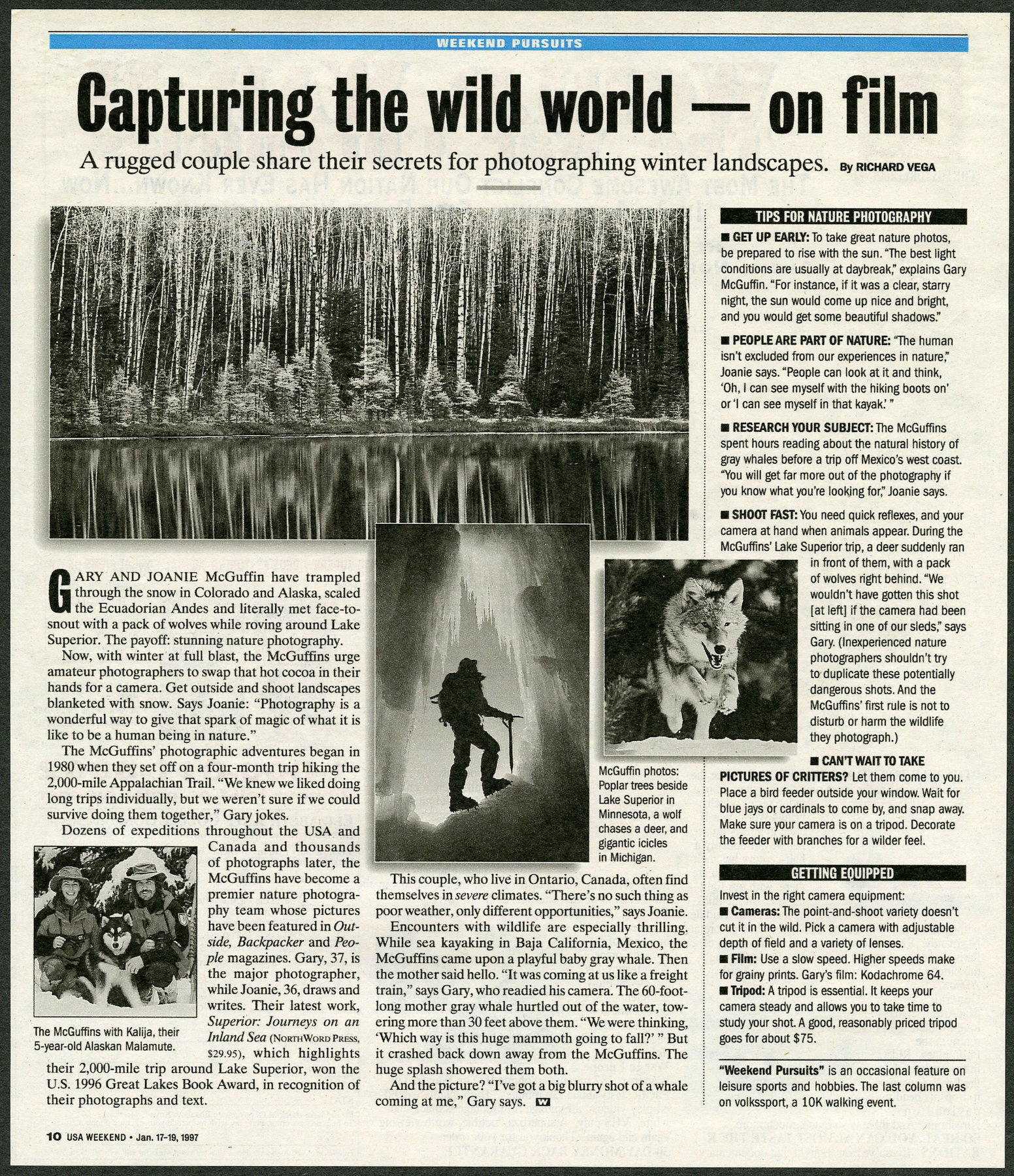