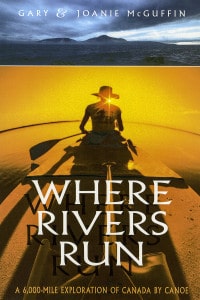 Where Rivers Run is the record of a remarkable odyssey across Canada by water: To fullfill their dream of travelling from sea to sea in a canoe, wilderness adventurers Joanie and Gary McGuffin, recently married, set out from the Gulf of St. Lawrence. Two years, 6,000 miles and 10 million paddle strokes later, they reached the open water of the Beaufort Sea. Along the way they faced hardship as they challenged many of this country’ most dangerous rivers. But in the process of realizing their dream, the McGuffins discovered a Canada that few ever see.

“This will stand among the annals of great adventure, not only for Canada but the world”. – The Toronto Sun

“…crisply written and deserving of considerable appreciation…” – The Globe and Mail

Purchase “Where Rivers Run” in our store.